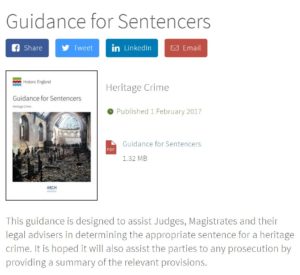 The IHBC has welcomed Historic England’s (HE) update of its Heritage Crime Guidance for Sentencers, which is designed to assist Judges, Magistrates and their legal advisers in determining the appropriate sentence for a heritage crime.

Mark Harrison, National Policing and Crime Advisor for Historic England said: ‘It is hoped it will also assist the parties to any prosecution by providing a summary of the relevant provisions.’

IHBC Research Consultant, and curator of the IHBC’s ‘Prosecutions Database’, Bob Kindred said: ‘IHBC members involved with relevant cases (and the legal officers with which they will enter into deliberations) are urged to familiarise themselves with the Guidance and ensure court officials are familiar with their existence as well.’

Bob Kindred continued: ‘We’ve been made aware of two recent listed building prosecution cases with markedly different outcomes, and while the circumstances and the sentencing is a matter for the courts, the Institute is keen to ensure that heritage specialists in particular but also their local authority legal officer colleagues, and local court officials are aware of Historic England’s recently updated ‘Heritage Crime Guidance for Sentencers’ (2017).

In the first case in Yorkshire substantial fines and costs were levied against owners and their agent for unauthorised works to curtilage buildings, notwithstanding that prior to the case neither the local authority officers nor the clerks to the court were aware of the Historic England Guidance and the clerks had expressed regret at the time of the case that such guidance appeared not to exist.

In the second case in Kent, a small fine was levied for unauthorised alterations and persistent failure to comply with a Listed Building Enforcement Notice on a Grade 2 listed dwelling; the size of the fine prompting concern that again the magistrates court might have been unaware of the Guidance prior to sentencing.

Members are also reminded that practical day-to-day advice for local authority conservation professionals in preparing cases and briefing their legal colleagues has just been published by the Institute and can be accessed via the Toolbox on the IHBC website.

Find out more about the publication

See the IHBC’s commentary on the database