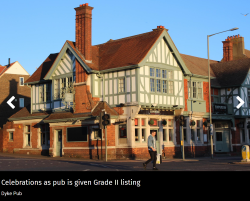 Local residents are celebrating after the Dyke Pub in Dyke Road, Brighton, which they are campaigning to reopen, was listed as a Grade II historic building.

The Dyke Pub in Dyke Road, Brighton, has been listed as a Grade II property by Historic England. The pub has been the subject of a campaign to reopen it after it was closed suddenly by the owner in September 2016. The pub is now up for sale. The Grade II listing means the owners will need to apply for consent to make any changes which might affect its special interest. Owner Martin Webb withdrew his planning application last month to reopen only half the building as a pub.

Susannah Kyriacou, of Save The Dyke Group, said: ‘At the time the listing was submitted there was a planning application that involved considerable changes to the building that would affect the special character of the building. It was listed already locally but national listing gives it some extra protection in planning law to be considered by the heritage officer. The owners had also at one point said they wanted to build houses in the beer garden, and being listed gives the council a bit more power to reject proposals that might affect the setting of the building.  Hopefully it means that the building is treated with the respect it deserves and not a development opportunity for any potential new owners. The local community would like to see it return to its use as a pub with a beer garden.’

Grade II listing is conferred on properties that are ‘particularly important buildings of more than special interest’. Describing The Dyke’s historical interest Historic England said  ‘This is architect Charles Henry Buckman’s best public house in Brighton possessing all the features of the Tudor Revival Style.’

The Dyke Road Hotel, a large purpose-built public house, was built in 1895 for the Tamplins Brewery and was designed by local architect Buckman. Councillor Geoffrey Theobald, former Conservative leader of the opposition, praised the campaigners for their efforts in getting the building listed. He said:  ‘This is good news. It is a great building and we want it to stay and we want it to return to being a pub. I can’t praise the campaigners enough.’

Mr Webb put the pub on the market for £1.25 million last month. As the building is also listed an asset of community value, the campaign group will now be given six months to come up with a bid to buy it. Save The Dyke Pub Group is meeting to discuss its next move. Mr Webb was not available for comment.