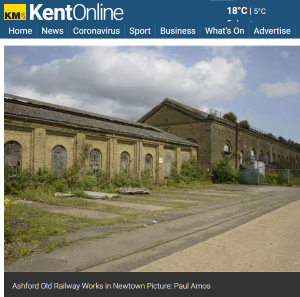 Video streaming giant Netflix is set to make new film and TV studios in Ashford its UK base, KentOnline understands.

Films could be made in Ashford by the end of 2021 – with a planning application for the Newtown railway works scheme set to be submitted this week.

A detailed plan for the Quinn Estates project was unveiled when the prolific development company held a public consultation at the Ashford Rail Club last Wednesday.

Two or three universities are expected to move onto the site, training students in film making techniques while giving them on-set experience.

Entertainment giants including Netflix, Amazon and HBO could fill the studios, which will sit alongside 300 apartments, a hotel and workshops.

Alongside the four 1,860 sq m studios, about 300 new homes will also be introduced into the train sheds – buildings which have lain largely unused since 1972.

The public consultation, held at The Railway Club in Beaver Road, was attended by a number of interested residents.

Beaver Lane resident Keith Wells, who once had a job at the works, said: “I’m very pleased they’re using a brownfield site and not covering more green land in concrete.

“I really hope they make the houses actually affordable, or at least set affordable rent prices, so that people on minimum wage can move in.”

One of the main sticking points among residents is access onto the site, with many saying Newtown Road won’t be able to cope with increased congestion or use by big vehicles.

Howard Green, who lives close to the town centre, said: “The only thing I’d be interested in finding out more about is getting in and out of the place.

“Why don’t they improve on the access road to the site and put in a roundabout around the clocktower?

“You’ve got that humpback bridge on one end and the railway bridge on the other, so you definitely have constraints.

“The rest of it they can do what they like with. Anything’s an improvement on what it is now.”