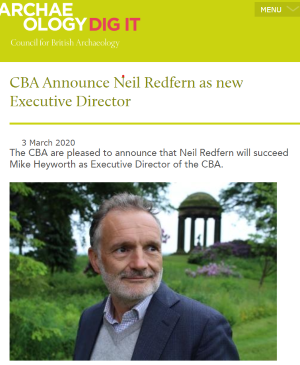 The CBA has announced that Neil Redfern will take the post of Executive Director of The Council for British Archaeology(CBA).

The CBA are pleased to announce that Neil Redfern will succeed Mike Heyworth as Executive Director of the CBA.

The Council for British Archaeology is pleased to announce the appointment of Neil Redfern as Executive Director.

Neil joins the CBA after a distinguished career in heritage, most recently as Development Advice Team Leader and Principal Inspector of Ancient Monuments for Historic England.

During his time at Historic England Neil led teams delivering award-winning development advice in Yorkshire, developed their response to major environmental threats as part of the National Heritage Protection Plan and initiated a major project on the Yorkshire Wolds to address monuments at risk from cultivation, amongst other achievements.

Prior to this, Neil spent ten years with English Heritage as North Yorkshire Team Leader, Inspector of Ancient Monuments and Field Monument Warden.

Between 1997 and 2000 he worked with the CBA as a Project Officer on its Defence of Britain project.

“I am delighted to be taking up this role with the CBA and looking forward to strengthening our role in championing archaeology in the United Kingdom.

Our landscapes and cities contain the most fantastic stories locked away in the fabric of their buildings and the undulations in their fields. Our role is to help the public ask questions about their places, to drive curiosity and inquisitiveness and use archaeology to help create meaningful places and experiences for all.“