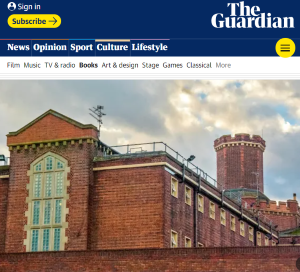 A campaign to convert the Grade II-listed (GII) former ‘Reading Gaol’ prison, backed by Reading council and luminaries including Stephen Fry, has been rejected by the Ministry of Justice.

The Ministry of Justice has rejected a bid to turn Reading prison, where Oscar Wilde was jailed for two years in 1895, into an arts centre.

The Grade II-listed building, which closed as a working jail in 2014, was put up for sale last year. Campaigners launched a bid to turn the site into an arts hub, attracting support from writers including Stephen Fry and Julian Barnes. But Reading borough council said on Tuesday that the MoJ has declined its attempt to buy the prison.

Council leader Jason Brock said that despite the rejection, he hoped to meet with the successful bidder – whoever that may be – to “work closely with them to ensure the historical and cultural value of Reading prison is given prominence as plans are developed”.

“The council’s bid rightly focused on the historical and cultural value of the site and it was dependent on securing significant external funds to manage the risk of taking ownership of this historic property,” he said. “We are naturally disappointed that the MoJ has rejected the council’s bid.”

The prison was immortalised in Wilde’s poem The Ballad of Reading Gaol, in which he charts the hanging of Royal Horse Guards trooper Charles Thomas Wooldridge for the murder of his wife. “I never saw a man who looked / With such a wistful eye / Upon that little tent of blue / Which prisoners call the sky,” wrote Wilde, who published the poem in 1898 under the name C.3.3 – his number in prison, his cell being the third on the third floor of Block C. “Each narrow cell in which we dwell / Is foul and dark latrine, / And the fetid breath of living Death / Chokes up each grated screen.”

In their support for the campaign, Fry had said it would be perfect if “living art can rise up from the place where Oscar and so many others suffered”, while Barnes told the BBC last month that “turning a prison into an arts centre is the equivalent of beating swords into ploughshares”.

The Labour MP for Reading East, Matt Rodda, who campaigned for the arts centre alongside Alok Sharma, the Conservative MP for Reading West, said he was deeply disappointed with the government’s approach, and urged the MoJ “to work with the council and respect the enormous historical importance of Reading Gaol”.

“I am concerned that the government still want to sell the jail to the highest bidder and I understand they now have a preferred bidder who they are working with,” he said in a statement. “I would ask them even at this late stage to reconsider and think again about selling the gaol to Reading borough council or an arts and heritage organisation.”