IHBC’s ‘Conservation from the doorstep’: Campaign to save historic South Shields cinema designed by Sunderland architect 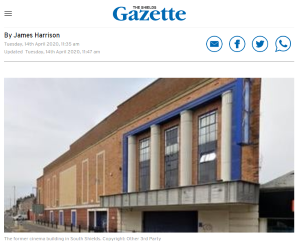 A campaign has been launched to save an historic cinema designed by a Sunderland architect from demolition, The Shields Gazette reports.

South Tyneside Council has approved plans to knock down the former Regent Cinema and Mecca Bingo Hall, in Dean Road, South Shields.But now a former planning officer for the borough is trying to save the building from the wrecking ball by having it officially designated worthy of preservation.

“It’s a very prominent landmark and very unique in South Shields in its 1930s design and I still think someone could look to turn it into housing,” said Sean Wilson, a former pupil at St Wilfrid’s Roman Catholic College.

“It’s one of those buildings you take for granted until it’s gone.

“Not a lot of people have realised it could be demolished and I think it warrants protection, hence going down the Historic England route for listed building status.”

Mr Wilson, who now works in the Lake District in the leisure industry but who visits South Shields ‘every two weeks or so usually’, thinks the former picture house’s status as one of few remaining 1930s buildings in a town better known for its Victorian architecture adds to its value.

He has now started a petition calling on Historic England to save the site by giving it protected status.

According to an application submitted and approved by the borough council, the building faces being flattened for ‘future re-development’.

Plans say it is considered ‘surplus to requirements’ …..

However, just three years ago planning chiefs approved plans for it to be converted into 37 flats with space for shops and a cafe, although work never started and permission for the work is due to lapse later this year.

The original cinema opened in 1935 with a screening of Leslie Howard’s The Scarlet Pimpernel and survived bombing during the Second World War, but closed and was converted to a bingo hall in 1966.

The building was designed by Cecil Clavering, an architect born in Sunderland who specialised in cinemas.

Visit www.change.org/p/historic-england-save-south-shields-regent-cinema-and-mecca-bingo-hall-from-demolition to find out more about the campaign.