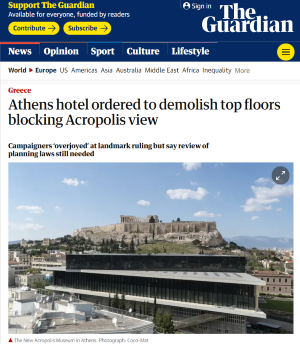 A battle over the right to enjoy uninterrupted views of the Acropolis has resulted in a five-star hotel being ordered to demolish its top two floors, in a landmark ruling hailed by residents of Athens, with campaigners ‘overjoyed’ at a landmark ruling, while noting that a review of planning laws is still needed.

Owned by Coco-Mat, the Greece-based mattress maker, the hotel — whose “breathtaking terrace” had been its selling point — opened its doors barely a year ago. Citizens enraged about the ten-storey establishment blocking their own views of the citadel took the case to the highest court in the land.

“It was a very brave decision,” said Athens mayor Kostas Bakoyannis of the ruling by Greece’s central archaeological council (KAS), the country’s top advisory body on the preservation of ancient antiquities. “The Acropolis is our heart and our soul, an essential part of our cultural heritage. It’s very important that everyone can enjoy it.”

Campaigners are on a roll. The decision follows more than a year of protests against “mammoth” high rises being erected in neighbourhoods at the sharp end of tourism beneath the fifth century BC site.

In April residents in Makriyianni, the district due south of the Acropolis, stepped up the fight launching an online petition, with members of the Avaaz activist network demanding the centre-right Greek government safeguard the declared archaeological zone. Within days 23,000 people had signed the appeal.

“We know of permits being considered for at least seven huge hotels,” said Irini Frezadou, the Swiss-trained architect spearheading the grassroots drive. “We are overjoyed that under pressure the immovable Greek state has finally acted but it’s urgent we have new building and planning laws if the urban and cultural environment of the Acropolis is to be protected.”

Spurred by the protests Greece’s archaeological council unexpectedly convened. After six hours of debate conducted via teleconference, the expert committee came to the unanimous conclusion that the multimillion-euro edifice would have to be lowered, in the name of protecting the symbol of western democracy…..

Last week Greece’s highest court, the Council of State, also weighed in, adjudicating that in future, structures in the area must be 21 metres or less. The judgment came after the court revoked building permission for an even larger hotel due to go up in Makriyianni, with three underground parking lots and a pool garden on top.

“Both decisions are a huge victory, testimony to the strength of civil society and what people can do when they unite,” said Andreas Papapetropoulos, the lawyer representing the campaigners. “We are lucky that the tribunal convened under Katerina Sakellaropoulou,” he added, referring to the environmentally sensitive high court justice who has since become Greece’s first female head of state…..

….Bakoyannis, like the campaigners, believes no view should be the preserve of a privileged few. Athens, he says, stands out from other cities precisely because the Acropolis – undergoing a mini facelift ahead of reopening on 18 May – can be seen far and wide.

“In London there’s Big Ben but you can only see it from certain, richer areas. The same goes for Paris and the Eiffel Tower. But the Acropolis has a unifying character. You can see it from all around Athens, whether you live in a poor neighbourhood or a rich neighbourhood,” he told the Guardian.

But the mayor also cautioned against heaping blame on businessmen. Greece’s fragile economy is set to contract by as much as 10% as a result of the pandemic, with investment crucial to any recovery. He added: “It’s easy to say this bad hotel owner or that bad investor but we also need to be very clear about the rules we set, respect the decisions of our high court and create a predictable and safe business environment.”

How or when the owners of the hotel will be called to demolish the upper floors has yet to be revealed. So far they have not reacted publicly to the KAS decision, and when asked to comment, declined.

Locals have scrambled to find the money to cover legal costs. Many grumble they are doing what the state should have done long ago. But Frezadou and her fellow activists see it as a duty to keep on going: international investors are lining up, fuelling fears of runaway greed transforming the area forever.

“Our battle is not yet over,” she said. “This campaign is not against one, but every, ten-storey monster in the shadow of this glorious site.”