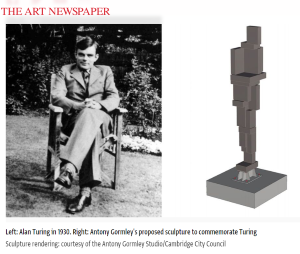 Historic England, the organisation responsible for protecting the country’s heritage, has said that a proposed 12-foot steel sculpture dedicated to the memory of gay World War Two codebreaker Alan Turing would ruin the ‘existing character’ of King’s College, Cambridge.

Turing, who studied at the college, was responsible during wartime for cracking the Nazi’s Enigma code. In the early 1950s he was convicted of gross indecency and chemically castrated as a result. Soon afterwards he committed suicide. The proposed sculpture, which has yet to be approved by Cambridge City Council, will be produced by Angel Of The North artist Sir Anthony Gormley.

Speaking about the project, Historic England spokesperson Claire Campbell is reported by The Telegraph as saying: ‘We recognise that the proposal would deliver some enhancement to the significance of the King’s College through the introduction of a sculpture by a renowned contemporary sculptor and the visible commemoration of Turing.’ She then added that ‘introduction of an eye-catching sculpture in a prominent position’ would be ‘at odds with the existing character of the college’ and would ‘result in harm, of a less-than-substantial nature, to the significance of the listed buildings and landscape, and by extension the conservation area.’

Speaking about his proposed sculpture, Sir Anthony said: ‘In honouring Alan Turing and reflecting on his remarkable contribution to the way we live now, I do not want to make a statue but the very best sculpture that I can make.’ He added: ‘Turing was someone who had a strong moral sense and his personal life was extremely difficult. He was someone who had a remarkable way of making decisions unaffected by emotional bias but at the same time was highly emotional himself.’

Antony Gormley’s proposal for a sculpture commemorating the Second World War code-breaker Alan Turing has run into trouble after the heritage body Historic England criticised the 12-feet high memorial piece planned for the University of Cambridge. The abstract metal figure made of 19 steel slabs would “harm” King’s College, where Turing read mathematics in the 1930s, says Historic England. But other cultural figures, including the directors of both Tate Modern and Tate Britain, back Gormley’s vision.