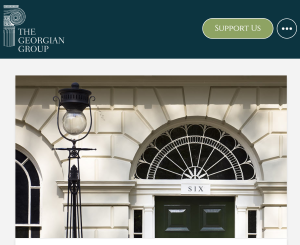 The Georgian Group is delighted to announce the appointment of Paul Zisman as its Chairman Designate, succeeding to the present Chairman, Christopher Boyle QC after The Group’s deferred 2020 Annual General Meeting.

Paul is the Co-founder and Managing Partner of Europa Partners which advises intellectual property-based publishing, media and data businesses.  He has been Chairman of the London Sinfonietta since 2012 and of The Cardinall’s Musick since 2011.  Between 1997 and 2005 he served as a trustee of The Young Vic Theatre Company and as the Chairman of its Finance Committee.

He has a life-long interest in architecture.  As an undergraduate he was President of Oxford University Architectural Society and recently restored a London town house of 1722.

Christopher Boyle said: ‘The Group is extremely lucky to have found in Paul a very able new Chairman, ready to face the challenges of the future. I know we are in a position, now, to go from strength to strength.’

Paul Zisman said: ‘I am delighted to have been chosen to succeed Christopher Boyle as Chairman of The Georgian Group.  I have always had great admiration for the work of the Group in protecting and promoting our Georgian heritage.  Looking at buildings has played a large part in my life and it will be an immense privilege to combine this enthusiasm with working with the Trustees and management to support their important work.’

The AGM, postponed from 25 June, will be held on 23 September.