IHBC’s ‘Heritage from the doorstep’: Demolition plans for GII LBs in St. Joseph’s orphange in Preston move a step closer 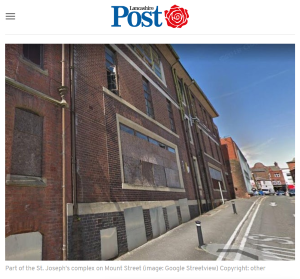 The site of the former St. Joseph’s Orphanage in Preston city centre looks set to be partially demolished for housing, writes The Lancashire Post as plans have been recommended for approval which would see several of the Grade II-listed buildings (GII LBs) pulled down, though the chapel would be retained and converted into new properties.

The Mount Street site has lain empty and become increasingly derelict over the course of more than a decade – parts of it were last used as a care home. But heritage campaigners have strongly opposed the proposed demolitions.

Under the plans, the orphanage itself and Sick Poor Institute block – built in 1872 and 1877 respectively – would be levelled, along with a hospital building added in 1933 and two others built in the 1950s. However, the gable end of the orphanage and an associated tower would escape the bulldozers.

The chapel, built in 1911, would be turned into seven town houses, with the cleared part of the site housing three newly-built apartment blocks – totalling 48 flats – and a further ten town houses.

A heritage statement accompanying the application accepts that the loss of the nineteenth century buildings would “lead to substantial harm to the significance of [a] heritage asset”.

The site is considered to have historical value in its demonstration of the need for orphanage facilities during the late Victorian era. The hospital building was also where Lancashire-born musician and comedian George Formby died in 1961.

However, a feasibility report notes the extremely poor condition of the buildings, which have deteriorated even since previous plans for the site were drawn up in 2009 – compounded by vandalism. The earlier proposal would have retained more of the buildings than are currently due to remain standing – but is now not thought to be viable.

However, the Victorian Society was highly critical of the scheme in its consultation response to the latest plans, claiming that the buildings “retain a great deal of their significance”, in spite of their current condition.

In a report by planning officers, the organisation is quoted as attaching the most significance to the two oldest buildings on the site, describing how they contribute “to the wider townscape” – and could be repaired.

“The 1872 orphanage is a solid gothic building with steep and prominent gables, with a handsome attached tower [which is being retained]. Its surfaces are enlivened by shallowly recessed two-centred arches, raised brick panels and elaborate brick corbelling.

“The Sick Poor Institute building offers a stark contrast in situation and materials. This building is tall, thin and rises close behind a strong wall built tight to the pavement edge of the narrow Mount Street,” the society says.

In spite of the Grade II-listed nature of the buildings, Historic England made no comment on the application and advised Preston City Council to refer the matter to its own conservation adviser.

Planning officers have concluded the proposals, by Czero Developments Limited, are “considered to be the most realistic scheme for this site”.

“[There are] clear public benefits and…these outweigh the substantial harm to the heritage assets that has been identified,” their report adds.

No affordable housing will be required for the site, because the proposed floorspace falls below the minimum level at which it can be demanded under a government incentive scheme to encourage the development of brownfield sites on which vacant buildings are demolished or converted.

Ordinarily, an application of this scale would have been decided by the council’s planning committee, taking into account officer advice. But with all council meetings suspended as a result of the coronavirus outbreak, the application will be determined by the authority’s chief executive under emergency powers, following consultation with political group leaders.

The public can make representations on the proposal up until midday on 4th May, by emailing devcon@preston.gov.uk