Appeal launched to save historic pen museum in Birmingham 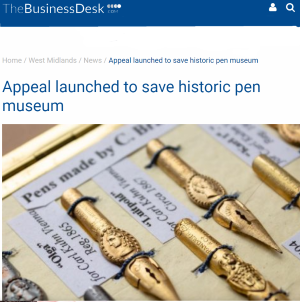 The Pen Museum in Birmingham’s Jewellery Quarter is at risk of facing closure due to COVID-19 unless funds are raised to keep its doors open to the public.

The Pen Museum, which is situated on Frederick Street in a former pen factory, has been educating the public for nearly 20 years about the legacy of Birmingham’s pen trade.

The mass production of affordable pens in Birmingham – a trade which employed an estimated 8,000 workers – helped improve literacy worldwide. At its height, Birmingham’s pen industry was producing over 80% of the world’s pen nibs.

Now, the museum that tells this story about an integral part of Birmingham’s heritage, is at high risk of closing its doors.

The Pen Museum is not insured for business interruption and currently does not receive any outside funding. The museum is largely run by a group of volunteers but still needs to meet bills and overheads even when the building is closed and not receiving any income.

Andy Munro, chair of the Pen Museum, said: “The visitors we see to the Pen Museum include many families and school children as well as attracting many international tourists.  The city’s Pen Museum is unique and is an integral part of Birmingham’s history and attractions. It would be a great loss to Birmingham’s great story of enterprise that reached across the world”.

“The Museum has a great future as a source of education and entertainment for so many young people as their world becomes more digital. Our sights are clear on how we can improve the museum into the future as we embrace the new world of communications”.

As a result of the current lockdown, the Pen Museum has launched an urgent appeal to help them survive this emergency.

“Being an independent museum of charitable status we rely extensively on the regular income from visitors to keep the museum open. We have therefore set up a crowd funding page and are asking people to donate just £2 to help us save an incredible piece of Birmingham’s history.”