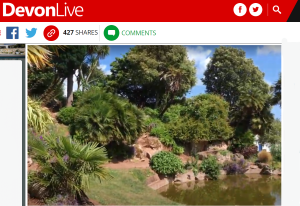 Vandals have been defacing a historic grotto in the grounds of Oldway Mansion at Paignton, including painting on the walls and starting fires, reports Devon Live.

Vandals have been defacing a historic grotto in the grounds of Oldway Mansion at Paignton.

They have been climbing over a fence into a man-made cavern in the rock garden to paint on the walls and start fires.

The hidden garden was built in the grounds of the historic building early last century by a leading French landscape architect for Paris Singer.

The Singer family built Oldway Mansion after making their fortune from sewing machines.

The home and grounds were remodelled by Achille Duchene and the grotto was created behind a ridge, hidden from the formal gardens.

Stone paths lead through a rockery to a pond fed by a stream with a waterfall over one of the cavern openings.

The stream then feeds a bigger pond and is crossed by stone bridges.

The cave was made from steel and concrete and lined with limestone.

Devon landscape gardener FW Meyer used 1,000 tonnes of stone to lay out the rock garden between 1900 and 1902.

The gardens are listed by the government conservation agency English Heritage because of their historic importance.

The steel framework holding the roof slabs over the cavern is now in poor condition and at risk of collapse.

A report to Torbay Council says that people have been climbing a boundary fence to get inside.

The intruders have lit fires and defaced the walls with graffiti.

The council is now proposing to seal off the caves temporarily with steel mesh until a permanent solution is found.

It has made an application for listed building consent for the work, because the structure is part of the listed gardens.

Duchene transformed the Singer family home and grounds between 1897 and 1910.

A trust has been created to manage the mansion on behalf of Torbay Council and a bid for almost £10million has been submitted to the National Lottery Heritage Fund for a restoration scheme.

The council-owned stately home was put on the Victorian Society’s national list of most endangered buildings in September 2018.

The listed mansion set in 17 acres of gardens was built at the end of the 19th Century for American inventor Isaac Singer who made his fortune from manufacturing sewing machines.

The French Renaissance-style building last used as council offices has been empty since 2013, but the grounds are open to the public.

Plans to turn it into a luxury hotel fell through in 2016 and two years later councillors rejected a plan from Torbay’s elected mayor to start the process to sell it.