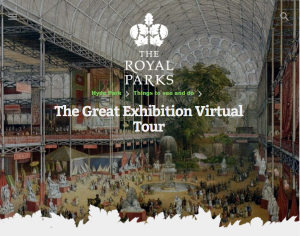 Thanks to today’s technology, the Royal Parks can now offer a virtual tour of the Crystal Palace.

The south side of Hyde Park was the site of the Great Exhibition of the Works of Industry of All Nations in 1851. Organised by Prince Albert, the event lasted only five and a half months but during this time it showcased the industrial and cultural advances that characterised Victoria’s reign, and welcomed over six million visitors. The exhibition and its exhibits were housed in an enormous temporary glass structure which became known as the “Crystal Palace”.

Thanks to today’s technology, you can now take a virtual tour of the Crystal Palace to get a feel for the scale of it, admire its beautiful and innovative design, and discover amazing facts about the exhibition it housed.

Using a combination of CGI and 360° photography which overlays the historic building onto the present-day site, you can switch between then and now. Marvel at the huge scale of the building, look closely at recreations of beautiful details and soak up soundscapes recreating the atmosphere. As you move around you’ll discover intriguing stories: find out about the first ever public toilets and the lady who walked from Cornwall to attend, becoming a celebrity in the process!

The building was regenerated digitally using The Royal Commission for the Exhibition of 1851’s archive of plans and images, as well as The Royal Parks’ own historical maps and documents.

If you have any questions or comments about the virtual recreation, please email us at learn@royalparks.org.uk

The Great Exhibition was considered a success and led to similar World Fairs around the globe, including one in France in 1889 that constructed the Eiffel Tower as its entrance. After the Great Exhibition closed in Hyde Park, the modular glass and iron building was taken down and relocated to Penge Place in 1852, an area of South London now known as Crystal Palace. You can still visit the footprint of the original building in Hyde Park, marked out by plaques on the pavement near South Carriage Drive.

The second iteration of the palace was reopened by Queen Victoria in 1854 and sadly destroyed by fire in 1936. Among the 100,000 people who came to watch it burn was Winston Churchill, who remarked “This is the end of an age”. However, the legacy of the Great Exhibition lives on. The surplus profits were enough to build the Natural History Museum, Science Museum and the Victoria & Albert Museum, as well as set up trusts to fund research and development that still exist today.