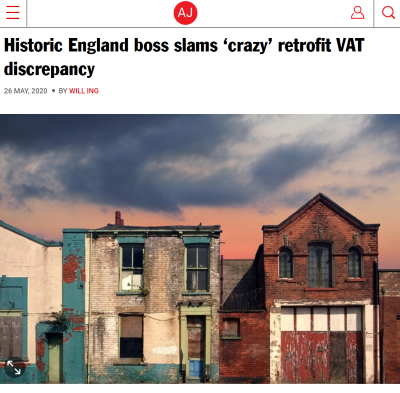 The Architects’ Journal (AJ) has headlined how the chief executive of Historic England characterised the difference between the VAT rate for retrofit and new build as ‘crazy’, in its first virtual AJ100 breakfast event.

At the first virtual AJ100 breakfast event, held on Friday (22 Friday), Duncan Wilson called for retrofits to be taxed at the same level as new-build projects.

‘We have been speaking to the government for quite a long time [about] changing the VAT regime,’ said Wilson.

‘That is something we need all to keep battering away at, because it is somewhat crazy to have zero per cent on new build and 20 per cent on repair, refurbishment and maintenance.’

One of the three demands of the AJ RetroFirst campaign, which is supported by Historic England, is for VAT on refurbishment to be reduced from 20 to 5 per cent.

But Wilson noted that government may be unwilling to cut taxes following a period of very high public spending during the fallout from Covid-19.

‘There is a more fiscally neutral way of doing [VAT reform], which would be to raise VAT on new build and lower it on repairs and maintenance to the point that the Treasury is no worse off,’ he said. ‘But that would be more controversial.’

In a wide-ranging talk, Wilson also revealed that 21 per cent of homes in the UK are more than 100 years old and that more homes than ever date to before 1919 as a result of subdivision and retrofit.

He also argued that refurbishing ageing homes to increase their energy efficiency was key to tackling climate change.

Wilson showed data which demonstrated that less carbon would be produced by 2050 by retrofitting a typical Victorian terrace house than by demolishing it and building a new low-carbon house.

And Wilson acknowledged that heritage concerns will sometimes be at odds with reducing carbon in an old home.

‘There may be planning rules that will get in the way of making buildings significantly more energy-efficient – such as on glazing or curtilage,’ he said.

‘We are going to have to be more flexible and consider greater degrees of alteration than we previously have.’