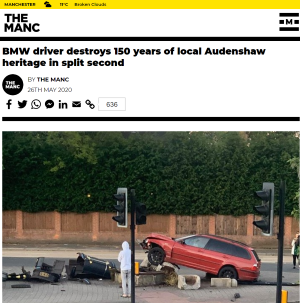 A BMW driver destroyed 150 years of local Audenshaw heritage when he collided into a popular Tameside monument, The Manc has reported.

The Grade II listed monuments in Audenshaw date back to the 19th century, were plowed through in the early hours of the morning.

The driver of the vehicle had been reported to have left the scene, but was later located at his home address and arrested on suspicion of drink drive, according to Greater Manchester Police.

According to GMP, officers were called to the scene just before 5am after locals reported a crash involving just one car, a BMW 330. …locals said they heard a ‘long loud bang and saw the car had mounted the pavement’ where it crashed into a junction known locally as ‘the trough.’

The ‘trough’ was erected at the junction of Manchester Road and Audenshaw Road in Audenshaw, Tameside at a time when both cattle and horses were still regular uses of public highways.

It is beloved by the local community, so it’s no surprise council bosses were today urgently trying to salvage what was left of the structure.

There is now an on going investigation….’