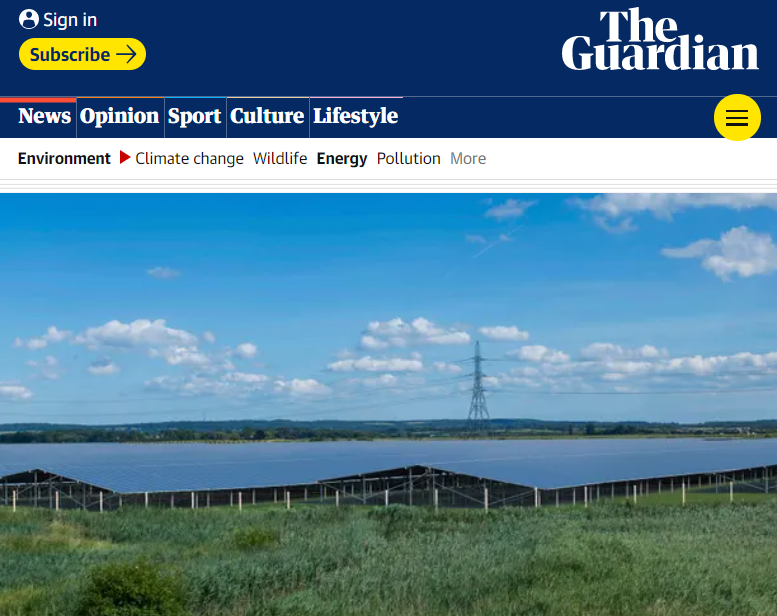 Britain’s largest solar farm, capable of generating enough clean electricity to power 91,000 homes, is poised to receive the greenlight from ministers this week.

The subsidy-free renewables park is expected to reach a capacity of 350MW by installing 880,000 solar panels – some as tall as buses – across 364 hectares (900 acres) of farmland in the Kent countryside.

The project is expected to be constructed one mile north-east of Faversham close to the village of Graveney and may also include one of the largest energy storage installations in the world.

The developers expect to receive a development consent order for the £450m project from the business secretary, Alok Sharma, on Thursday almost three years after talks began with local stakeholders over plans for the park.

Once it has the final g0-ahead from the government the developers hope to begin building the Cleve Hill solar farm from early next year, and begin generating clean electricity by 2023.

Renewable energy is considered a crucial element in the UK’s plans to end its contribution to the climate crisis by building a carbon neutral economy by 2050, and it could also help spur economic growth in the wake of the coronavirus.

The UK’s growing fleet of solar panels has produced record levels of clean electricity in recent weeks, reaching fresh highs of 9.68GW last month and helping the UK energy system to its longest stretch without coal-fired power since the Industrial Revolution.

The renewables industry believes the UK’s solar power capacity could rise to 27GW by 2030 after the UK government dropped a block which prevented solar farms and onshore wind projects from competing in subsidy contract auctions….

…Helen Whately, the Conservative MP for Faversham and Mid Kent, said the scale of the development would have a “devastating” impact by “industrialising” the countryside.

“We’re not talking about a few fields – this would destroy an entire landscape. I want to see us reach net-zero by 2050, but this should not come at any cost,” she told the Sunday Telegraph earlier this month.

The Campaign to Protect Rural England in Kent has also warned that the proposed battery storage facilities are five times the size of some of the largest storage projects in the world, which could raise the risk of explosions and fire….

…Cleve Hill has put forward plans to preserve native woodland and scrub within the bounds of the site by hosting a habitat management area of more than 138 hectares – including a new bat roost.

The planning will include footpaths for ramblers, and a buffer zone of at least 63 metres between the solar park and the Saxon Shore Way.

A spokeswoman for the project said the developers had responded to concerns over the scale of the project’s battery storage ambitions “in great detail” during the examination process with the Planning Inspectorate….

…• This article was amended on 26 May 2020. An earlier version said that Cleve Hill solar farm had won the support of the Planning Inspectorate earlier this month. However, the recommendation has not been made public. This has been corrected…..