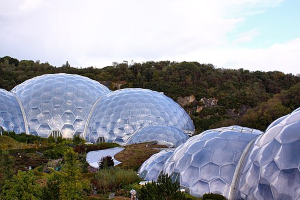 The company behind the major Eden Project tourist attraction in Cornwall is to begin work on a feasibility study for a proposed new project in Dundee.

Dundee City Council and the University of Dundee are to collaborate on the study, which is being supported by businesses and institutions in the area.

The proposal – provisionally known as Eden Project Scotland – is part of Eden’s portfolio of international projects which also includes developments in China, Australia, New Zealand and Costa Rica as well as UK projects including in Morecambe, Derry and Portland.

The feasibility study, which is due to commence in early June, will establish a suitable site for the project, begin developing content ideas and explore the potential for creating jobs and boosting the regional economy.

Like every Eden Project around the world, Eden Project Scotland will be transformational and regenerative with an overarching theme of humanity’s connection to the natural world.

The original Eden Project, located near St Austell in Cornwall, opened in March 2001 and boasts the world-famous geodesic Biomes, one of which houses the world’s biggest undercover rainforest…..

John Alexander, Dundee City Council leader, said: “We are delighted to be working with Eden Project International and our local and national partners on such an exciting collaboration….