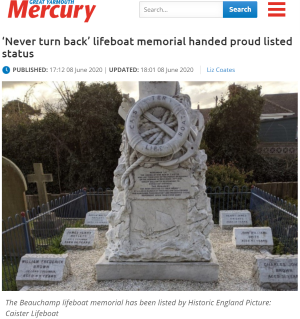 The Beauchamp memorial in Caister, for nine lifeboatmen who lost their lives has been added to the nation’s list of buildings of historic interest and has been given Grade II designation, reports the Great Yarmouth Mercury.

The Grade II designation of the Beauchamp memorial, in Caister, means extra protection and recognition of its value.

In the listing it is hailed by Historic England for its sculptural quality featuring a broken mast, anchor, laurel wreathes, and lifebuoy.

Experts said it was a “visual reminder of the tragic loss of life at sea,” describing it as “an eloquent and moving tribute to the bravery of the crew who perished in 1901, and a poignant reminder of the sacrifice of the local community.”

The marble memorial, unveiled in 1903, remembers the crew of the Beauchamp who perished while trying to save a fishing smack in distress.

Poignantly, individual grave stones were placed within the boundary of the memorial in the same position as the crew occupied the lifeboat.

At an inquest into the deaths, assistant coxswain James Haylett famously said the crew would never give up on a stricken vessel, with his comments then being taken up nationally by the press and public as “Caister men never turn back”.

The Beauchamp had been in service for nine years, and been on some 81 “shouts”, when disaster struck.

The ill-fated rescue effort saw the boat launched amid churning seas on November 13, 1901.

So severe were the conditions it took several hours to even get afloat, and eventually the boat was overcome and capsized trapping the crew underneath.