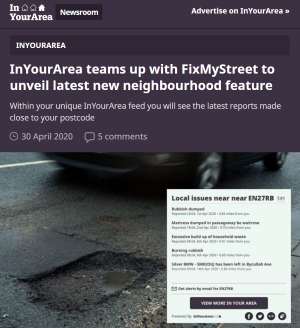 The latest new feature for users of InYourArea has been launched, helping to highlight neighbourhood issues in need of attention.

We’ve joined forces with FixMyStreet, the hugely popular online service for reporting incidents of fly-tipping, graffiti, damaged roads, broken street lights and so much more, to power our latest initiative.

Now within your unique InYourArea feed you will see the latest reports made close to your postcode which have been flagged with your local authority for attention.

We have also made the feature available to our extensive network of local and national news websites, including Mirror Online, the Manchester Evening News, Liverpool Echo and Bristol Post among many others, to carry within their reports as an interactive widget.

FixMyStreet is part of the mySociety organisation, a not-for-profit group using online technologies to empower citizens to take their first steps towards greater civic participation.

David Eaton, from mySociety, said: “Since 2007, FixMyStreet’s been making it really easy to report problems such as potholes or graffiti to whichever authority is responsible for getting it fixed.

“All you have to do is mark the problem on the map, and the system sends your report off to the right council or highways authority.

“We’re delighted that FixMyStreet is now accessible on InYourArea, helping people keep an eye on reports within their own local communities.”