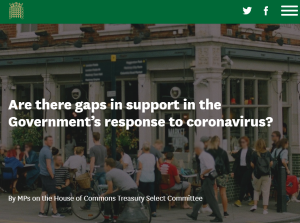 The Treasury Committee has published a unanimously-agreed interim report as part of its inquiry into the Economic Impact of Coronavirus called Gaps in Support.

The Chancellor has frequently stated that he will do whatever it takes to protect people and businesses from the effects of coronavirus. Support measures, including the Coronavirus Job Retention Scheme (CJRS) and Self-Employment Income Support Scheme (SEISS), have been introduced by the Government to protect the livelihoods of salaried and self-employed individuals.

The Treasury’s interventions have been welcomed by many, but rolling out financial support at pace and scale has inevitably resulted in some hard edges in policy design and some critical gaps in provision.

More than two months into lockdown, many people continue to endure financial hardship whilst being unable to benefit from the Government’s two principal support schemes. The inquiry has identified the following key concerns and made a series of recommendations for how the Government can assist these people: