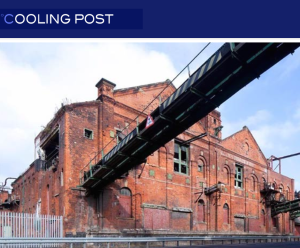 The roof of the Grimsby Ice Factory is to be assessed with a view to carrying out much-needed repairs to the historic grade II* listed building, industry platform The Cooling Post reports.

Repairs to the roof would protect the internal structures and refrigeration equipment from further deterioration as options for the Ice Factory’s future use are considered.

Opened in 1901, and derelict for the last 30 years, the Grimsby Ice Factory is the earliest and largest known surviving ice factory in the world. It still contains an array of historic ice making equipment including four J&E Hall ammonia compressors installed in 1931.

Historic England has awarded North East Lincolnshire Council (NELC)£40,000 for the work from their Heritage at Risk grant programme. The council is working with the Great Grimsby Ice Factory Trust (GGIFT), regeneration partner Engie and building owners ABP. Extra funding is also said to have come from ABP and surplus monies from a 2019 coastal revival fund grant.

The Ice Factory is on Heritage England’s At Risk Register within the Grimsby Heritage Action Zone, (HAZ), and is “of more than special interest” due to the grade II* listing of the building itself, along with its machinery and contents.

It’s hoped that the survey will be carried out this summer, with a view to seeking further investment to carry out the repairs that are identified. A condition survey carried out last year suggested that total building repair costs would run to £11.5m with urgent works costing £5.2m.

Vicky Hartung, chair of GGIFT, the local group which has been battling for years to save the building, sees this as a crucial step on the ladder to the building’s survival and rebirth.

“Whenever we receive positive news, we are further inspired to continue to work to successfully see this building’s restoration. It is iconic, a real heritage asset and we are now beginning to feel that there is light at the end of a long tunnel,” said Vicky.

Owner ABP is also said to be hopeful that there is now a real focus on finding a long-term solution to the Ice Factory issue.

Dafydd Williams, head of communications and corporate affairs at ABP Humber, said: “This is yet another positive milestone in the regeneration of the Port of Grimsby. Alongside the Ice Factory and the drip feed of good news on new projects in the Kasbah, we have seen the port transform in recent years to become the biggest centre for offshore wind operations and maintenance in the world.”

Historic England regional director – Midlands, Louise Brennan said: “The Ice Factory is a landmark building, not just because of what it represents from the past, but what it could provide for the port and Grimsby in the future. Achieving complete repair and total repurposing in one go will be a huge task, but there are steps that could be taken towards saving the building and making it capable of housing useful meanwhile and temporary activities. Looking at cost-effective options to re-roof the building is crucial.”

Last month it was revealed that a London-based businessman, Tom Shutes, was behind plans to  turn the building into a 1,400-capacity theatre venue, retaining the surviving refrigeration equipment and making it a feature of the new building.