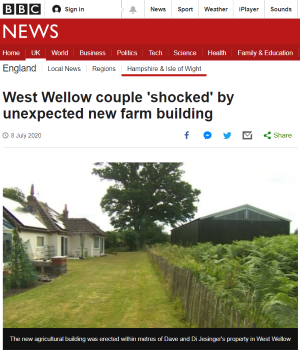 A couple have been left ‘flabbergasted’ after a large agricultural building was unexpectedly erected a few metres from their house, reports the BBC.

Dave and Di Jesinger said their home in West Wellow, Hampshire, previously had views of an empty field before the structure was built.

Owners of the land in the New Forest National Park have not commented.

The couple’s neighbours struck a deal with a nearby farm to build the metal barn-like structure.

Mr Jesinger, who bought his house with his wife in 1971, said the only warning he had of the plans was when his neighbour called the night before construction began in May.

“We were absolutely flabbergasted, shocked, desolate,” he said.

“We now live with the blinds and curtains closed because we can’t bear to look.

“We have known [our neighbours] for over 30 years, we consider them our friends… no one knows why they’ve done it and they’re not saying.”

He said the planning authority, despite being technically allowed to approve the building without consultation, could have exercised its discretion to put up warning notices or suggest an alternative location.

“I feel it is totally inappropriate that in a national park you can put up a barn of this size and appearance close to a house without there being any consultation whatsoever,” Mrs Jesinger added.

He said farms are not allowed to put up structures within 400 metres of houses under these rules if the building is intended for livestock – but this structure will not contain animals.

“It is nonetheless very unfortunate that the land owner chose to site this building so close to someone’s home,” he accepted.