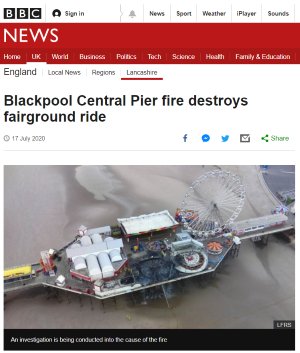 Some 50 firefighters have been tackling a blaze on Blackpool’s Central Pier.

Incident commander Mark Winder said it was soon brought under control thanks to “some fantastic early intervention” by crews.

“Fortunately we had some of the conditions in our favour so we did not have a particularly strong wind and the tide was out, so we were able to tackle the fire below from the beach as well,” he said.

An investigation into the cause of the fire has begun, he added.

The Promenade around the pier was closed for a time, but has since reopened….