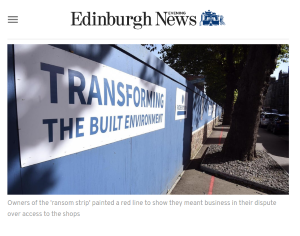 Owners of the so-called ransom strip at the controversial Accies development in Stockbridge have lodged an appeal after losing the legal battle over the status of the narrow piece of land.

A judge ruled the strip of ground along the frontage of the nearly-completed row of shops which forms part of the development in Comely Bank Road was legally part of the roadway and there was therefore a public right of passage, which meant it could not be used as a ransom strip.

Douglas Lowe, former chairman of the Grange Trust, led a consortium of senior Grange members in buying the strip of land for a reported £12,500 from the trust in 2017. They have said they will use any money they can obtain for the land to fund a new sports hall for the Grange.

They argued that although a 6ft-wide area of land had been handed by the trust to the council in 1912 to become a pavement, the ground under a now-demolished wall marking the boundary of the land remained in the ownership of the trust until they bought it.

Mr Lowe said the ruling by Lady Wolffe had come as a surprise and he was now considering whether to press the appeal.

He said: “We have entered the appeal and we are working on it at the present time. My legal advisers are cautiously confident.

“In my view there were considerable errors in law…..”

Planning permission for development of the historic sports ground – site of the first rugby international – was granted in 2014, including a new pitch, stand, changing rooms, shops, cafe bar, function suites and a museum.

The Raeburn Place Foundation, the charity behind the project, secured £8.5 million to go ahead with the first phase…..

….The size of the Accies hospitality suite has been scaled back and the foundation says it does not know when it will be able to start the second phase.

Mr Lowe said he had been involved in the land issue at the site for a long time, demanding the council reinstate the wall after it demolished it when he was chairman in 2014/15.

He said: “The [Grange] club has been behind it and the majority of people wanted me to pursue this action and I have 20 senior members who put in money to promote this.”

He said he was a “reluctant litigant” in the case because he had always hoped for a “sensible agreement”.

But he said: “If it succeeds it will be a huge benefit for the Grange….

“We hope the Grange will use the money for an indoor sports facility – two tennis courts, indoor hockey, football as well as social activities.”

Alastair Graham, fund-raising co-ordinator for the Raeburn Place Foundation, said: “We are very confident of the legal position and disappointed Mr Lowe continues to try to frustrate the development by a charity.”