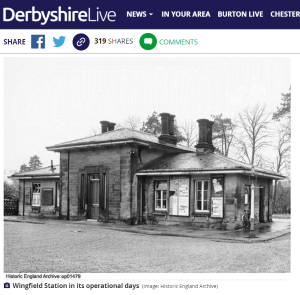 A grant worth hundreds of thousands of pounds has been awarded to repair a historic Derbyshire railway station that is the last of its kind, reports Derbyshire Live.

A sum of £263,000 from Historic England will go towards the urgent repair of Grade II* listed Wingfield Station, in South Wingfield, near Alfreton.

The substantial grant will allow for the site, which is one of the first purpose-built railway stations in the world, to be restored.

Wingfield Station, built in 1840 and closed more then 55 years ago, has been in private hands and at risk for many years.

In 2015 it was afforded Grade II*-listed status, in recognition of its national significance, being the last remaining Midland Railway Stations designed by Francis Thompson.

“Amber Valley Borough Council showed real leadership in exercising its legal powers to compulsory purchase the former station, and Derbyshire Historic Buildings Trust has pulled out all the stops to create an exciting and viable plan for the building’s future.

“The National Lottery is supporting this project, but work is desperately needed now and it will be some time before further Lottery funding can be obtained.

“So Historic England has provided this grant to make sure that the most urgent repairs are undertaken as soon as feasible and the building is saved.”

Since 2015 Historic England has assisted Amber Valley Borough Council in its discussions with the owner.

When it became clear the Borough Council had to use its legal powers to get the building repaired, Historic England stepped in to provide technical advice and grant funding.

Historic England also encouraged the Derbyshire Historic Buildings Trust (DBHT) to work up a conversion project and secure finance in order to take on the building.

A Compulsory Purchase Order was approved by the Secretary of State and Wingfield Station passed to DBHT in December 2019.

DHBT have obtained a Stage 1 National Lottery Heritage Fund grant and other funding to develop a project to convert the former station to office use.

Now, Historic England has offered a grant for urgent repairs in order to ensure the building is stabilised and the project is able to progress.

Lucy Godfrey, Project Co-ordinator on behalf of DHBT, said they were thrilled at the news.

She said: “We can now address risk sooner by preventing further loss of and damage to this significant building. This will bring us much closer to being able to secure a long-term sustainable future for Wingfield Station without damaging its historical and architectural significance in the process.

“The support team at Historic England has contributed an incredible amount of time and energy towards this project, for which DHBT – and our iconic station building – are extremely grateful.

“We are looking forward to working with the team, alongside our own experts and volunteers, in coming months to identify the best ways in which we can protect Francis Thompson’s sole remaining Midland Railway Station.”