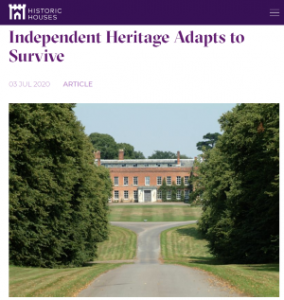 A new survey from Historic Houses reveals that the COVID-19 lockdown has had a significant impact on independent historic house visitor attractions.

But owners are working hard to adapt to the post-lockdown landscape:

‘The pandemic is a huge challenge, but heritage has suffered through worse than this in the past,’ says William Cartwright-Hignett, from Iford Manor, which is a member of Historic Houses, the UK’s largest association of independent heritage sites, encompassing 1,500 historic houses, castles and gardens.

A survey commissioned by the group this week has revealed that the owners of some of the UK’s oldest and quirkiest homes are doing what they do best – facing down adversity and planning how they can adapt to a very different and uncertain future. There’s a stoic determination to weather this storm in the same way that these houses’ former owners scraped through the dark days of earlier centuries – by changing and evolving.

Exactly seventy years ago, at the height of the last crisis of this magnitude for Britain’s country houses, when hundreds were being demolished as ‘surplus to requirements’ and too expensive to maintain, a report by civil servant Sir Ernest Gowers laid the foundations for a future for those that survived, as lived-in tourist attractions.

Until March this year, that strategy had been successful beyond his expectations. Historic houses, castles and gardens over the last few decades have become thriving businesses – welcoming more than 26 million visitors each year, generating more than 30,000 jobs across the country, and generating millions in tourist spend in neighbouring towns and villages. These historic visitor attractions employ more people now than at the height of the ‘Downton Abbey’ service culture – only instead of looking after pampered aristocrats these staff members were guiding sightseers, staffing cafés and giftshops, running festivals and holiday cottages, or staging weddings, events and film-shoots.

Now, says Ben Cowell, Director General of Historic Houses, all that economic and cultural progress is in danger of being undone thanks to the devastating impact that coronavirus and the consequent lockdown has had on heritage and tourist businesses. The first misconception he wants to lay to rest is that everything will go back to normal as soon as indoor attractions in England are allowed to open to visitors again – scheduled to be from this weekend (4 July).

‘Just under half of the places we’ve surveyed are in a position to welcome the public indoors again this year,’ he says. ‘Most of these attractions struggle to break-even at the best of times, and for some the impracticalities, public health risks and the added cost of measures to ensure social distancing and protect tourists from the virus are just too high to bear this year.’

‘Over eighty of our member gardens are now open or planning to open soon. It’s great that many houses now plan to open too. But we’re hearing from lots of owners who’ve had to take the tough decision not to open at all this summer – leaving many worries about how they will survive the winter months.’

‘The investment needed to re-open our successful jousting events safely this year,’ says Jason Lindsay, who lives at Hedingham Castle in Essex, ‘is prohibitive. If we could, we’d apply for a National Lottery Heritage Fund emergency grant, like some other heritage sites round here – but they’ve excluded all privately owned heritage sites, regardless of the public access and leisure opportunities they provide. Yet we’re the ones who care for most built heritage in Britain, picking up bills that government or the lottery could never cover if it were their responsibility.’

While eight in ten say that they intend to be back in the visitor business next year, a handful of historic house attractions have already indicated privately that they may never open to the public again – though far fewer than Historic Houses feared at the start of lockdown.

For many, the shutdown has also put on hold restoration work to fragile listed buildings – fifty historic houses say urgent repair projects have had to be put on hold, with an average value of £217,000 per project. ‘We have had to defer substantial capital expenditure on our historic buildings and landscape until we’re in a position to afford it’, says Duncan Clark, from Braxted Park in Essex.

This means it’s very likely that the £1.4bn backlog of repairs that was already facing Historic Houses members before COVID-19 has only got bigger since March, especially with most member places having to furlough maintenance or conservation staff whose salaries were funded with income from visitors, weddings, events, filming or accommodation, all of which has dried up totally.

The worry for many is that activities like weddings may be unlikely to restart in time to avoid redundancies before the end of the furlough scheme. Around 50% say redundancies are sadly almost unavoidable, with an average of four FTE roles likely to go at individual member houses.

Over half report that they’re considering major restructuring or fundamental changes to their business model as a result of COVID-19. New sorts of business activity are being actively considered, such as the drive-through cinema experiences popping up at places like Knebworth House in Hertfordshire, run by Martha Lytton-Cobbold, Deputy President of Historic Houses, who has already reopened her garden and shop and is offering a take-away service from the café.

Others are having to retrench and review their business model carefully. ‘It no longer makes sense to staff a bed and breakfast and offer dining,’ says Sammie Coryton, at Pentillie in Cornwall, where tourism is so vital for the region’s economy. ‘We’ll now just let the whole castle as a self-catering holiday home, while we re-consider our other events like outdoor theatre. Despite all the worry, it’s been an opportunity to take a long hard look at our offer, to make some fundamental changes, and to come back better.’

Back at Iford Manor, William Cartwright-Hignett agrees that the crisis might lead to positive change – eventually – as well as damage. ‘We’re still planning on opening a new restaurant and shop next year,’ says, ‘but we’ll widen the accessible areas of the garden, so people have more room to be apart.’

Others ponder whether the trend for working from home will lead to more midweek visitors, and in general there is widespread rethinking of opening hours in a diversity of ways – from extending their dates to make up for lost time, through replacing free-flow visiting with guided tours, to reducing their opening hours where they depend on volunteers who may themselves be older and vulnerable.

‘After the Second World War my cousin had to sell all the farmland and turn her house into an old people’s home – while she was still living in it – in order to keep the roof on the Norman keep,’ says Jason Lindsay, whose family is descended from the Earls of Oxford, who built Hedingham Castle in the twelfth century. ‘But that wasn’t working by the 1980s, when we inherited it from her, so in the last twenty or thirty years we’ve grown a tourist business, with 25,000 visitors a year coming for our buildings and our jousting events, and a thriving wedding business that provides 70% of the income we need to pay all our staff and maintain the historic fabric. That’s all been on hold since March and shows no sign of picking up any time soon, so we’ll need to cut costs and find other sources of income. If my predecessor managed to take desperate measures to keep the place standing, I’m determined to adapt, not be the weak link.’

For further information contact James Probert, Director of Marketing and Development, on james.probert@historichouses.org.