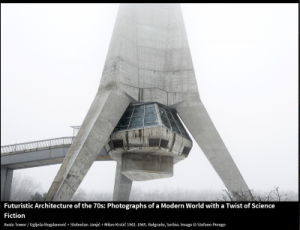 The IHBC’s heritage business register HESPR – our Historic Environment Service Providers Recognition quality assurance scheme for heritage services working to the IHBC’s standards – emails members weekly ‘News and Tender Alerts’, including notices gleaned from across the development sector’s publications, and this week features anotice on the photographic essay ‘Futuristic Architecture of the 70s: Photographs of a Modern World with a Twist of Science Fiction’, with images by Stefano Perego, from Arch Daily.

The Manifesto of Futurism, written by Italian poet Filippo Tommaso Marinetti in 1909, was the rallying cry for the avant-garde movement driven by the writers, musicians, artists, and even architects (among them Antonio Sant’Elia) in the early 20th century. After the manifesto’s publication, Futurism quickly came to the forefront of public conscience and opened the way for many other cutting edge movements in the art world and beyond.

While the movement would undergo a significant decline in the years following World War II, it reinvented itself decades later during the Space Age, when faith in technology and industry were at a fever-pitch and the world’s powers were racing to put humans on the Moon. All of a sudden, humanity had a new cultural panorama that inspired every facet of society–from musicians, to scientists, to architects. With the combination of engineering and art, not to mention the bountiful scientific achievements of the time, works of architecture turned into works of science fiction.

Recently, photographer Stefano Perego documented a series of works that exemplify the legacy left behind by the radical architects of the 1970s.

For a free promotion of your tendering opportunities and work needs to the IHBC’s HESPR members, please send details and links to Joanna at contact@ihbc.org.uk, as soon as possible.

Tenders can also be advertised for a fee with IHBC Jobs etc, including a targeted email to 2000+ recipients as well as full coverage on our NewsBlog alerts and social platforms (membership and followers c.18,000) and websites with c. 290,000 visits a month. Contact Joanna at contact@ihbc.org.uk