HE’s £50,000 grant to set up body to support Metal Detectorists 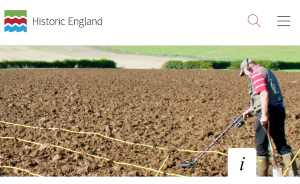 A £50,000 grant from Historic England will help set up a new organisation to support and train metal detectorists in the UK as the ‘Institute of Detectorists’ (IoD) aims to provide training opportunities to promote responsible metal detecting.

The project will explore how best to develop such an institute and help to establish an agenda for best practice as well as determining how this can be taught as part of a national training programme. It will also support voluntary self-regulation and provide a platform for detectorists to demonstrate their competence and skills to others.

He has also made a number of finds including the Civil War hoard at Broughton Castle in Oxfordshire in 1996. Three Spanish silver coins were among those found and are believed to be linked to Queen Henrietta Maria who met with King Charles on the 13th July 1643. They stayed that night near Broughton Castle at Wroxton Abbey.

“The aim of this project is to establish a not-for-profit research and educational body for detectorists. This body would promote responsible metal detecting as a technique that contributes to the understanding, conservation and protection of the historic environment.”

“This project provides an opportunity to build on an increasingly positive relationship between the responsible metal detecting community, archaeologists and other heritage organisations. The proposed institute could prove to be of great benefit for portable antiquities, archaeology and the wider public. This new body aims to train people in best practice in metal detecting and we applaud that.”

A Project Advisory Board and Focus group will be set up to help steer the development of the Institute and the feasibility study also has the support of national bodies such as the Portable Antiquities Scheme, Department for Digital, Culture, Media and Sport, Council for British Archaeology and Chartered Institute for Archaeologists.

The detecting community will be consulted on a business plan…