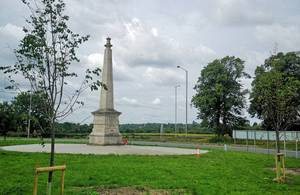 A living Gallipoli war memorial, the Stretton on Dunsmore monument in Warwickshire which commemorates where King George V saluted troops from the 29th Division, billeted in the area before they embarked on active service in Gallipoli in the First World War, has been restored to its former glory.

The Stretton on Dunsmore monument in Warwickshire commemorates where King George V saluted troops from the 29th Division, billeted in the area before they embarked on active service in Gallipoli in the First World War.

The avenue has been a landscape feature in this area since the early 18th century. It was saved from being felled when the monument was built to become a living memorial to the soldiers. Today it includes over 100 mature lime trees.

Working with the Dunsmore Living Landscape Scheme on the restoration, Kier first carried out a detailed survey on the health of the trees. Of the 136 trees scanned there were two, on the roundabout, that were found to be unsafe and were felled.

Twenty-three new lime trees have been planted where there were gaps in the avenue as well as two to replace those felled.

Some of the new trees will be dedicated to VCs awarded to the 29th Division later in the year.

Next month a new interpretation board will be installed at the site with details about the 29th Division and King George V’s visit to see the troops at Knightlow Hill in 1915.

Funding for the work came from the Highways England Designated Environment Fund, a £225 million ring-fenced fund allocated for 2015-2020 to spend on such areas as enhancing landscape and biodiversity along roads, reducing the impact of traffic noise and improving the cultural assets on and around the road network.

“This memorial on our road network clearly has historical and sentimental significance and we were delighted to be able to help restore the landmark which is so cherished by the community.

“As well as the environmental and landscape improvements, these works will protect the memorial for many generations to come. It truly is a fitting tribute to those it was created to honour and remember.”

“We worked in a truly collaborative way with the Warwickshire Wildlife Trust to improve this memorial and the surrounding landscape with funding from Highways England Environmental Designated Funds. Additional thanks also to contractors AC Landscapes and Treeworks for their efforts.

“As we reach the centenaries of the nation’s WWI memorials, it’s fantastic to see this unique monument and living memorial, so valued by the local community and the Gallipoli Association, getting the care that will help it continue through its next century.

“The new surfacing and lighting make such a difference and the wildflower sowing shows how areas around heritage features like these can be used to help improve the local biodiversity.”

“This work highlights the 29th Division memorial, thus keeping the memory of the Gallipoli campaign alive. This proud division, nicknamed the Incomparables, served in Gallipoli and then went on to fight on the Western Front. The casualties they suffered during World War One were equivalent to four times the initial strength of the Division. They were awarded more VCs than any other division.

“At the dedication of the memorial in 1921, Sir Ian Hamilton, who commanded British forces in Gallipoli said, ‘if you want to see a monument raised to tenacity, you do not need to go to the Dardanelles. Come to Warwickshire and look here’.”