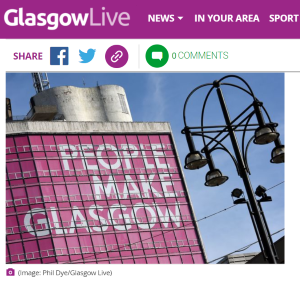 Glasgow is a city filled with beautiful architecture wherever you look, with visitors to the city impressed by its stunning mixture of Victorian, Art Nouveau and Gothic buildings. With the likes of Glasgow Cathedral, Kelvingrove Art Gallery & Museum, the City Chambers and the Gallery of Modern Art among the most Insta-worthy spots that visitors to the city flock to. Yet with every splendid sight that speaks of the city’s past to marvel at, there are those which look like they deserve to say hello to a bulldozer and wiped free from our collective memories. Here’s our, perhaps a little controversial, list of the biggest eyesores in the city:

Kentigern House
This monstrosity of a building on Brown Street near the Broomielaw might have the best excuse for looking like it does – given the fact its believed to be bomb-proof.Opening in 1986, while the building – the biggest MOD office outside of London – may be functional, plenty have no doubt made a wish to see a large bulldozer introduced to it.

City of Glasgow College building
Aka the ‘People Make Glasgow’, this has to be up there with the most eye-catching building in the city ever since it was emblazoned with its big sign ahead of the 2014 Commonwealth Games. Yet for many the most eye-catching building also represents the biggest eyesore as it towers over George Square and the rest of the city centre like an old (pink) watchtower.

Temple Gasworks
Having been part of the landscape of the west end of the city for over 100 years, the listed gasworks next to the Forth and Clyde canal are a real reminder of Glasgow’s industrial heritage.Yet without being in use for a good while now, the gasworks now resemble rusting skeletons to the past that continue to stand 200ft tall and dominate the skyline.

Tay House
A building which made use of one of the spaces dubbed ‘the Bridge to Nowhere’ following completion of the M8, the huge office block dominates the Charing Cross area.Unfortunately, with its bog-standard look and (shocking) salmon-pink colour, it feels like one former eyesore was replaced with another that looms large over the motorway below.

The ‘Tinfoil’ building
When the sun makes a (rare) appearance in the Glasgow sky, folk walking up Blysthwood Street or along Waterloo Street in the city centre need to put on their shades to stop being blinded by this building – one of the most recognisable office buildings in the city. Clad in its stainless steel exterior, the Spectrum building bears more than a passing resemblance to the Christmas turkey you stick in the oven.

Vita Student Glasgow
There used to be a magic view from the top of the unofficial world’s steepest street that is Gardner Street in Partick right across the Clyde. But that’s gone now after this frankly hideous massive student housing complex on Beith Street was built a few years back. If that isn’t bad enough, it also spoils the view as of the west end and the Kelvin as you come in and out of Partick station -even if it has a decent Lidl built into it.

Livingstone Tower
One of the earliest high-rise commercial buildings to go up in the city centre in the post-war period, the ‘Livi’ tower on Richmond Street sits in start contrast to the brutalist buildings round about it on the Strathclyde Uni campus. Yet despite that, its dark green glass panels and orange metal uprights are arguably among the worst colour pairings you could find on a building, anywhere.

Anniesland Court
A magnet for brutalist architecture fans, the residential block in the west end of the city on Anniesland Cross lays claim to being Scotland’s tallest listed building.Yet its height seeing the building stick out like a sore thumb on the skyline, one exacerbated at night when it lights up in neon lighting to resemble Optimus Prime.

Cineworld Renfrew Street
Another biggie to make the list, the 17-storey cinema holds the current record for being the tallest cinema in the world. Yet it is also a building that was lambasted locally when it was being built not just for its sheer size but for its appearance. With, in 2000, the building receiving the unwelcome accolade of ‘Carbuncle of the Year’ in a Scotland-wide ugliest building competition.

Glasgow Harbour
It may be home to some of the most expensive and sought-after flats in the city, but that doesn’t stop the riverside urban village from having its fair share of stick for being ‘ugly’. Granted, it did replace the Meadowside Granary complex of buildings which, while looked on with a nostalgic eye were in need of being pulled down. when they were back in 2002.