IHBC marks passing of David Lovie, Past President and leading light on our first constitution 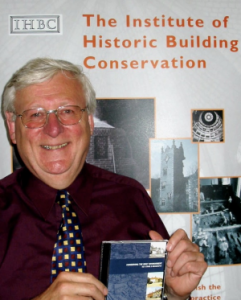 The IHBC is sad to announce the death of our Past President David Lovie, a distinguished conservation professional and IHBC volunteer who, in 1997, led on drafting the founding constitution of the Institute as a professional body, charity, and lead body in built and historic environment conservation skills specification and regulation.

David’s wife Jean has kindly updated members as follows: ‘David died very peacefully at home on Sunday evening [19 July]. He was so keen to be at home so it was special that it was possible.’

‘We were delighted to receive the IHBC’s Yearbook. It was one of the last items he could grasp before becoming too seriously ill. I read out short summaries and he was able to hear with real pleasure what you are all pursuing.’

‘David’s only regret was that he wouldn’t be part of IHBC’s future plans, but he said he knew they were in safe and committed hands!  It is a long way on from his position in the 1960s and 1970s, when he was derided at times for his passion for historic buildings.’

IHBC President Mike Brown said: ‘We will always love and appreciate David for all that he did for the IHBC and the many fun times we had in his company.  We offer our deepest sympathies to, Jean, and their two sons.’

David McDonald, IHBC Chair wrote: ‘It is with great sadness that I have to inform you David Lovie died… As many of you will know he had been ill for some time, but his wife Jean has informed us that he passed away peacefully at home with his family.

I think it fair to say that David was a giant of UK conservation and a true stalwart of the IHBC. From his work in Newcastle, particularly the regeneration of Grainger Town, as well as his writing, teaching and his tenure as IHBC President, he has been an inspirational member of our institute. I will miss him dearly.  There will be an obituary in Context later this year.’

‘Because of the current restrictions, there was a small family funeral…. If in the meantime you would like to pass on condolences, could you do that through Lydia Porter (admin@ihbc.org.uk), and feel free to pass on this sad news to others who may have known David…’.

IHBC North Branch Chair Jules Brown writes: ‘We all know David was something of a colossus in the heritage world, devoting his career to progressing a distinctly communal approach to conservation.’

‘During his illness in lockdown, David even briefly entertained himself with the 2020 YearBook and was chuffed to see the contribution the Institute is making to the impact of Covid-19 on the sector.  Jean said how he wished he was getting stuck into it all. You can imagine he’d have really relished this challenge!’

‘Having worked with him, I know how joyous and inspirational he could be; I’m going to miss him greatly.  At a North Branch level we’ll reflect on how we can acknowledge his contribution in the region… but, for the time being, I’ll be remembering David in my thoughts.’

‘Jean has suggested that we could raise a cheer for ourselves and David over whatever glass we favour…  I shall certainly be doing that!’

IHBC Director Seán O’Reilly writes: ‘David was the best adviser and support I could have had when I took up my post with the IHBC, and through the most challenging of times after.  I will write separately on that in a future ‘Director’s Cut’ in Context.’

If you were unlucky enough not to have enjoyed his profoundly humane approach to conservation in all its holistic scope and benefits, you should look to his contribution to our 2012 Yearbook to get a real sense of his values; our NewsBlog on ‘… taking the ‘pants’ out of Pant’ for his constructive way with humour, and for his visionary affirmation of the continuity between community and specialist through the benefits of conservation amenity his award-winning work linking conservation professionals and communities in his home community in Alnwick.