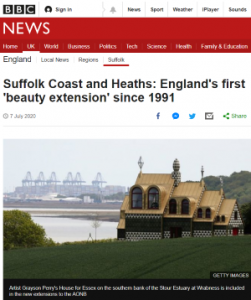 Suffolk Coast and Heaths AONB has been expanded by about 38 sq km (14.6 sq miles) – almost a tenth of its size.

The extension includes the Stour Estuary, stretching from Manningtree to Harwich in Essex, and a tributary of the estuary called the Samford Valley.

According to Natural England, AONBs are designated to “protect the land to conserve and enhance its natural beauty”.

The organisation offers advice to local authorities on planned building work in these areas but, unlike national parks, there are no legal powers to prevent development.

Suffolk Coast and Heaths AONB had not been extended since it was designated in 1970, and the current area stretches from Kessingland in the north to Shotley Peninsula in the south, taking in Rendlesham and Tunstall forests and Orford Ness.

The additions include the Stour Estuary and its southern bank in Essex, which comprises woodlands, mud flats and saltmarsh and is of international importance for its wildfowl and waders.

The extension also includes a tributary on the southern shore of the Orwell Estuary between Ipswich and Woolverstone, known as the Freston Brook Valley.

The Department for Environment, Food and Rural Affairs (Defra) said it was the first time any AONB in England had been extended since 1991.

Mr Eustice said: “These extensions are a worthy addition, especially during this unprecedented time, when many of us are connecting with nature more than ever.”