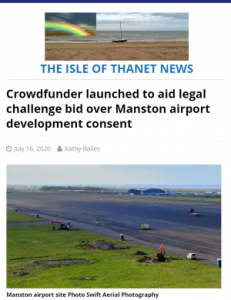 A crowdfunder has been launched in a bid to apply for a Judicial Review over the decision to approve a Development Consent Order for Manston airport, reports The Isle of Thanet News.

The Isle of Thanet News writes:

Chair of Ramsgate Coastal Community Team Jenny Dawes – who says she is acting alone but with a groundswell of community support – has a £12,000 target in a bid to launch the legal challenge.

Solicitors Kate Harrison and Susan Ring of Harrison Grant have agreed to act and to instruct barristers Richard Wald QC and Gethin Thomas in the action.

A Judicial Review will look at whether the Government followed correct procedure in reaching the decision to approve the DCO for RiverOak Strategic Partners.

The decision on a development consent order for the Manston airport site was announced on July 9 after delays in January and May.

The Department of Transport approved the application to create an air freight hub at the site despite the Examining Authority panel of Martin Broderick, Jonathan Hockley, Kelvin MacDonald and Jonathan Manning recommending to the Secretary of State that development consent should not be granted.

The approval makes Manston the first ever site to gain a DCO for an airport.

The application was accepted for examination in August 2018 and it was completed on 9 July 2019.

RSP says it will reopen the airport in a £300m project to create an air freight hub with passenger services and business aviation. Plans for construction will be phased over 15 years and will include freight stands and four passenger stands for aircraft as well as warehousing and fuel storage to meet the forecast demand.

There are also plans for education and training, flight training school, business aviation and passenger services.

But Jenny Dawes says her action is being launched due to the decision being made against the examining panel’s advice….