Dunston Staiths: BBC on a symbol of the past fighting for its future, courtesy locals, BPTs, and more 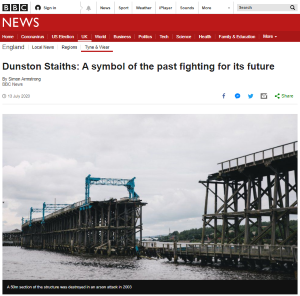 At more than 500m (1,650ft) in length, it is reputedly the largest timber structure in Europe. It has stood by the Tyne since the 1890s, surviving both the decline of mining and repeated arson attacks.

However, the future of Dunston Staiths remains far from certain. Could a new partnership with the National Trust offer salvation?

With the loss of heavy industry, Dunston – the birthplace of football star Paul Gascoigne and AC/DC rocker Brian Johnson – is no longer the thriving hub of old, and the wooden structure looks almost forlornly towards the long-since rejuvenated quayside less than a mile away.

There, the vast flour mill in which hundreds toiled daily has been transformed into the Baltic Centre for Contemporary Art while alongside sits the gleaming curved glass of the Sir Norman Foster-designed Sage Gateshead music centre.

Supporters hope the staiths could mine a similar seam of success, even though the way ahead looks far from easy.

“You just think ‘Oh no, not again’,” says Andrew Smith of the Friends of Dunston Staiths action group, who watched with dread when the latest blaze took hold seven weeks ago.

“You could see how big the fire was. The timber was so dry.

“The emergency crews did an incredible job. It’s still upright, but it’s certainly not safe enough to open for access without repairs being done.”

After its working life drew to a close in the late 1970s, a repeating cycle of repair and ruin has seen the structure languish on Historic England’s Heritage-at-Risk register.

Partly restored ahead of the 1990 National Garden Festival staged on the adjoining land, a fierce blaze in 2003 tore away a large section, which remains absent today.

A further arson attack followed in 2010 and the two most recent – last year and this May – undid much of the good work resulting from a £1m refurbishment completed in 2015 that had enabled its western section to be opened from April to September for heritage days, a food market and dog show.

Replacing the charred hardwood damaged over the past 18 months alone could cost £250,000, engineers estimate, while millions would be required to rebuild the missing stretch…..

For the charity gifted the staiths in the 1990s, its cultural value is beyond question and finding ways to generate revenue for repairs and restoration is paramount.

“Much of the region was built by the coal industry,” explains Kari Vickers, deputy manager of the Tyne and Wear Building Preservation Trust (TWBPT). “It was instrumental in the development of the towns and cities….

“You can let it rot – and it would become unsafe – or you can try to fix it.

“The idea is to turn it into an urban pier, but that alone doesn’t bring funds in. A strategy is needed – how can it make money?”

Creating a jetty for river tours and installing camping “pods” on the decking are two ideas under consideration, along with solar panels to generate energy which could then be sold to the National Grid…..

“We’ve been incredibly successful at Gibside by looking at what local people want and need,” says Robyn Brown, the National Trust’s assistant director of operations in the North.

“The village didn’t have a pub so we opened one, and we looked at what families want from days out and introduced children’s activities.

“Souter Lighthouse has also been a brilliant partnership….

For Mr Smith, the partnership is a “vote of confidence”…..