IHBC features ‘Heritage from the doorstep’: Turnchapel in uproar over revised bid for ‘huge shed’ at Plymouth beauty spot 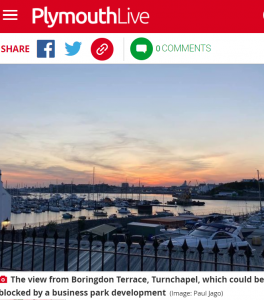 A revised bid for a ‘huge shed’, an industrial unit, planned for opposite the historic terrace of homes overlooking Turnchapel Wharf and Plymouth Sound, is provoking controversial, reports PlymouthLive.

Plans for a new workshop blocking a waterfront view at Plymouth have been changed after talks between council planners and the developer.

Windows have been added to the back of the proposed industrial unit opposite the historic terrace of homes overlooking Turnchapel Wharf and Plymouth Sound.

The change has been judged by council experts to lessen the harm on the setting of the listed buildings in the village conservation area.

But more than 50 objections were received by the city council to the alterations, a report says.

The roof of the new unit on the wharf would be up to 2.4m above a wall along Boringdon Road, Turnchapel, which is the route of the South West Coast Path.

The rear would block views towards Plymouth Hoe from the road alongside the colourful listed buildings of Boringdon Terrace, which can be seen from across the water.

The new building is proposed for research and development of autonomous vessels – robot boats which operate without anyone on board.

Objectors say the size of the unit would harm the setting of the historic area and block views.

Robert Dixon wrote: “The revised building development has not addressed any of the previous concerns and is wholly inappropriate given the conservation status of Turnchapel village.”

In total the council has received one letter of support and 211 objection letters from 119 members of the public.

The city council’s planning committee deferred a decision at a meeting in June to see if any changes could be made to the scheme.

Councillors wanted to find out if the building could be lowered, or the pitched roof be replaced with a flat one.

Both options have been ruled out, but the applicant Yacht Havens has revised the rear of the building by adding the windows.

The planning application is back before councillors at a meeting on Thursday, August 20, with the updated plans and a recommendation for approval with conditions.

The new report says Yacht Havens told officers the ground level on the wharf could not be lowered due to the flood risk.

It also said the height and design of the roof could not be changed because of the size of cranes needed inside.

The building could not be moved because of underground services and the need to access slipways and jetties.

The city council’s Urban Design Officer and Historic Environment Officer both say the revised plans are an improvement and reduce the impact of the unit on the listed buildings and conservation area.