IHBC’s ‘Out of Context’ CPD boost from Ireland:  The architects’ view of conservation evolution in Ireland – and ‘The RIAI’s role in conservation’ 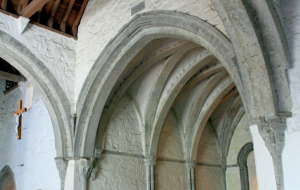 If you need more for your IHBC ‘Management’ and ‘Intervention’ CPD, try examining aspects of Irish conservation history in issue 163 of the institute’s member journal Context, as the Royal Institute of the Architects of Ireland’s (RIAI) role in the evolution of conservation is explored by lead authorities and players, John Graby and Robin Mandal.

When the RIAI (Royal Institute of the Architects of Ireland) was founded in 1839, the impetus behind it was more preservation than conservation. In 1835 a major programme of workhouse building had been announced for Ireland, work eagerly anticipated by Irish architects. However, the entirety of this programme was given to George Wilkinson, a 27-year-old architect from Oxford. An organisation to protect the interest of Irish architects was needed, hence the founding the RIAI. Wilkinson settled in Ireland and some years later (in 1851) was elected vice president of the institute. Despite what could be regarded as an organisation founded to protect professional interests, the RIAI has been active in architectural conservation as a body and through its members.  1913 saw the RIAI producing the first listing of architecturally important buildings in the country.

… Following the publication of the Charter of Venice in 1964, a small number of practitioners started to specialise in conserving and restoring buildings. By 1974 the philosophy of conservation was being developed worldwide and Ireland,….

….with its rich cultural inheritance of buildings, was well placed to be part of that developing knowledge. With the publication of the Burra Charter in 1979, the stage was set for a better understanding of our heritage and how to pass it on intact.  Members of the RIAI were at the forefront of these developments, understanding that the architecture of today is the built heritage of the future. The conservation working group was set up and led to the development of the first RIAI conservation policy, which was adopted in 1994. A new conservation policy was developed and approved by council in 2018.

With the changing legislation… it developed the Conservation Accreditation System.  While there is still some misunderstanding as to what exactly conservation means, the standard of debate, discussion and reasoning is much higher than it was. This can be seen in the finished projects. Most important, the RIAI Conservation Policy and Conservation Accreditation System have changed the attitude of architects, clients, authorities and the public. Unlike most of architectural practice, we understand that the correct approach to conservation is to do as little as possible.

Read the full article and find out more