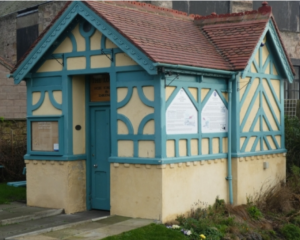 While the UK saw a boom in the building of public loos from the 1850s onwards, the vast majority were strictly for men, which prompted a campaign for facilities to be provided for women, as reported by INews following new designations described by Historic England head of listing, Dr Deborah Mays, as representing ‘the gradual opening up of a world of new leisure and work opportunities previously unavailable to women’.

If there had been any doubt that the female population of Berwick-upon-Tweed would welcome the opening of the town’s first public toilets for women some 121 years ago, it had been dispelled by the end of the facility’s first day of operation.

The takings from the opening day in March 1899 were five shillings and tuppence, meaning that some 62 women had ‘spent a penny’ – and in so doing rejected the common Victorian view that public conveniences were not suitable for females.

Now the utility and significance of the Bankhill Ladies Toilets in the Northumberland town, among the first to be built for women in Britain, has been recognised anew after the loos became one of two vintage public conveniences to be granted protected status.

Heritage body Historic England has recommended the Bankhill conveniences, built to resemble a country cottage, and a second Edwardian public loo in Seaburn, Sunderland, for Grade II listing as early examples of female toilets and their role in freeing women from the drudgery of domestic life.

The latter half of the 19th century saw a boom in the construction of public conveniences in Britain in locations from high streets to railway stations, parks to workplaces. But Victorian attitudes towards women’s participation in life in public  – from socialising to entering the workplace – meant nearly all public loos were strictly for the use of men.

The lack of provision meant that women were unable to stray further than their own homes, or those of friends or family, because of the lack of public toilets – a restriction dubbed the ‘urinary leash’.

The issue soon became part of Britain’s nascent female emancipation movement with one organisation – the Ladies’ Sanitary Association – set up to campaign for the building of womens’ conveniences amid suspicions that in at least some cases toilets were not being built to keep women at home.

Debbie Mays, head of listing at Historic England, said: ‘The lavatories in Berwick and Seaburn reflect the emerging changing social status of women at the end of the 19th and the beginning of the 20th centuries. The appearance of toilets like these represented the gradual opening up of a world of new leisure and work opportunities previously unavailable to women.’

The Bankhill ladies toilets opened a year after the first facility for men opened in Berwick-upon-Tweed and remained in use until the 1950s. It has until recently served as a café and ice cream parlour after the building was restored in 2014.

The underground Seaburn facilities, which opened around the turn of the 20th century adjacent to a tramstop, still retain many of their original features including handbasins, toilets and decorative partitions. After closing in the 1960s, they were recently reopened after restoration in 2018.

The toilets join a list of protected conveniences which includes the remains of the Roman toilet block at Housesteads Fort on Hadrian’s Wall, where up to 800 soldiers shared a communal facility and a sponge on a stick for cleaning purposes; and the Art Nouveau conveniences at Nelson Street in Hull, recently ranked by the Lonely Planet guide book as one of the top 500 tourist attractions in the UK.