Heritage science case study: The benefits of burying stone, from HE via Stone Specialist 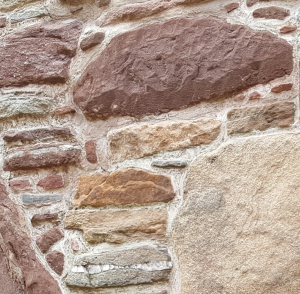 If historic masonry needs to be stored until it can be repaired it can be protected and preserved highly effectively by burying it in the right conditions, determines a three-year study by Barry Hunt and Carlota Grossi for Historic England reported on by the Stone Specialist.

Before stone is fashioned into cladding, ashlar, columns, quoins, mouldings, flooring, statues, paving or any of the other uses to which it is put, it is dug out of the ground, where it has survived for millions of years. Once it is exposed to the air and weather it starts to deteriorate. So is it a good idea to bury it again in order to preserve historic masonry?

Certainly stone masonry that has been buried incidentally over the aeons has preserved evidence of former civilisations for us to uncover in archeological digs. There are examples such as the neolithic village of Skara Brae on Orkney and the Roman city of Pompeii. And at Brú Na Bóinne in County Meath, Ireland, a megalithic tomb was discovered that dates back 5,500 years with burial chambers containing stones with well preserved elaborate carving.

There are much more recent examples of stone being deliberately buried in order to preserve it for future reinstatement when money and/or time to do so become available. Some have been successful, some have not prevented deterioration of the stone.

To avoid leaving such outcomes to chance, Historic England commissioned an investigation into the effects of burying – or perhaps we should say ‘re-burying’ – stone in order to preserve it. The research was carried out by Barry Hunt, geologist and Director of IBIS, a consultancy specialising in building material problems, and Carlota Grossi, a geologist and statistician currently working for the Norwich Medical School at the University of East Anglia, Norwich.

They were to have presented a paper on their findings at the International Congress on the Deterioration & Conservation of Stone, due to be held in Germany in September this year, although it has become a casualty of the Covid-19 pandemic.

The findings of the research provide food for thought with regards to preserving our stone heritage, although the commercial part of the industry might also find a range of uses for the information – for example, on how quarrying operations are suspended and quarried material preserved.

Here Barry Hunt presents a summary of the findings of the research he and Carlota Grossi carried out.

Historic England wanted to know more about the effects of burying stone. The primary reason was a need to reduce the costs of preserving natural stone monuments and structures where the funds are not immediately available to carry out more extensive preservation work.

Funds for the upkeep of the many buildings and monuments of historical importance that come under the auspices of Historic England are rarely sufficient. This results in the building fabric being left unprotected while funds for major interventions are awaited, sometimes for decades.

Historic England has considered ways in which fabric deterioration can be slowed while awaiting such intervention and one solution has been to remove fabric to controlled storage facilities. That, however, is expensive, so an alternative solution has been the on-site burial of fabric in what have become known as ‘clamps’.

But stone burial was poorly researched and the possible benefits and risks were neither known nor understood.

The research carried out to come up with some answers involved testing designs of clamps over a minimum of three years.

The majority of historical structures built in England use local stones, which are commonly sandstone or limestone.

The following eight types of stone were selected as a representative sample of English building stones. The list of the stones that follows includes basic descriptions along with density (D–g/cm3 ), water absorption (W–per cent) and saturation coefficient (S) values.

Blocks of 300mm length, 200mm width and 200mm height were used because, in practice, masonry to be buried would typically be relatively large.

Clamps were created at an exposed site using four different burial media. They were set at both shallow and deeper levels. Probes set in the stone blocks measured the temperature and moisture contents, which were compared with data from a weather station at the test area.

Two sets of the stone blocks were left out in the open for comparison, one free of ground contact the other sitting on the ground.

Exposure began in November 2014. It is clear buried stone blocks do not easily dry out in clamps once saturated and, unsurprisingly, that shallow buried stones undergo more rapid freezing than deeper buried stones.

The depth of burial along with the ability of a stone to take on board and retain moisture is clearly critical. This suggests that burial sites need to be well drained and ventilated with direct moisture contact reduced.

The reason stone has been buried in the past is because clamps were thought to provide protection from the principally maritime environment of the UK, including cyclic frost attack.

However, having received enquiries from owners of historic structures concerning the use of clamps, Historic England realised there was no tangible research or other technical backup available to support the promotion of clamp use. It therefore represented a significant unknown risk.

Therefore in late 2005 Historic England undertook the burial in sand of some 600 stone elements at Riveaulx Abbey, near Helmsley in the North York Moors National Park, with sensors to monitor the burial environment.

A principal conclusion of this initial research was that further and more in-depth research was required. Hence the subsequent project.

As there was no relevant literature to draw on for the design of clamps, apocryphal stories from stone quarriers about the protection by burial of stone over winter and general geological observation of natural stone resources within the UK environment were used to inform the design.

The two principal factors believed to exert the greatest influence on a clamp environment were considered to be temperature and moisture content. How these two factors interacted over time, particularly with respect to the degree of saturation at a time of freezing, and possibly the rate of freezing, was considered to be important.

The amount of cover to the stone and the nature of the burial media were believed to be significant controlling factors of both the moisture content and temperature, so some variation in these was required.

The most obvious variation was the stone itself, hence the eight stones chosen for the experiment.

Two sets of control stones were left in the open, one 200mm off the ground on a wooden pallet and another standing directly on the ground.

At the end of the monitoring period in early 2018 the stones were assessed for change using petrography and electron microscopy, and mercury porosimetry at different levels from the surface.

The test site was in Helmsley, North Yorkshire, not too far from the sea. The burial media was considered to be a potential factor in the performance of the clamps, especially in relation to moisture transmission in and out of the clamps, so four different materials were used:

With a total of 43 measurements being taken each hour, 1,130,040 measurements were obtained over the course of the continuous three-year monitoring period.

….The use of exposed sides was considered to be potentially more realistic but likely to increase the damage potential due to an increased rate of heat loss and reduced ground heat storage effects.

Monitoring began on 5 November 2014, just ahead of the first frosts. During those frosts, the Creeton limestone left sitting on the ground suffered damage clearly observable with the naked eye. This demonstrated that the local climate over the winter period had been particularly harsh. It was also apparent that this would provide a good basis for comparison with the Creeton in the clamps, which survived well.

The stones within the clamps gradually took on board moisture, which then stabilised. As stone is damp when it is first extracted from a quarry or mine (quarry operators call it ‘quarry sap’) it is assumed the stone reached a natural level of moisture content in the clamps.

There are strong conclusions applicable to the project findings.

a)                    The blocks in the clamps gradually saturated to an apparently natural content that was then maintained, almost regardless of the outside influences.

b)        The depth of block burial within the clamps made little difference to the developed natural moisture content, although its fluctuation appeared greater in stone blocks closer to the surface.

c)                     Shallow buried blocks exhibited around half the number of freezing events compared with the outside temperatures actually experienced.

e)                    The introduction of an impermeable cover over the stone made little difference to the moisture and temperature profiles.

f)                     The type of burial medium used makes little difference to the conditions of the blocks under burial as long as there is no water-logging.

g)                    The burial media gradually leached materials on to the surfaces of the blocks, especially the upward facing surfaces.

h)                    The leached materials in those instances did not result in any significant issues, although some types of aggregate may be more susceptible to releasing potentially damaging minerals and this needs to be considered.

j)                     One stone (Creeton) suffered catastrophic early failure where it sat outside on the ground, thus providing very positive direct evidence that the clamps were affording a level of increased protection.

l)                     Those stones left outside the clamps clearly suffered from colonisation by living organic matter that would almost certainly increase deterioration rates in the longer term.

m)       Exposed stones possibly picked up more airborne salts. This was minimal for the duration of the experiment but over the longer term could develop into a significant amount.

When taking into account the various findings of this research project, it is considered that the use of clamps can be highly beneficial to the protection of natural stone monuments and structures. Coarse, open-textured aggregates probably provide the most stable environment as they allow more effective drainage and moisture control.

Based on the research findings, it is possible to make several recommendations for clamp design, ranging from not placing the clamps within areas prone to flooding through to avoiding locations where tree roots may infiltrate.

The full findings are soon to be uploaded to the Archaeology Data Service (archaeologydataservice.ac.uk), which is an accredited digital repository for heritage data.

The findings can be translated to a quarry environment, where freshly produced stone blocks need to be left over winter. It is a case of moving the material to a free draining area and covering it to a depth of at least 500mm to increase significantly its protection from frost damage. Closer packing will help slow the loss of heat.

Newly processed stone sitting in a yard, and especially stone in plastic wrapping, will reduce drying times and make the stone more susceptible to damage.

When stone is delivered to site, simply keeping it off the ground until it can be used will greatly reduce the potential for damage.

This advice might appear obvious, but there is nothing like knowing why you should do something rather than simply assuming it is what should be done.