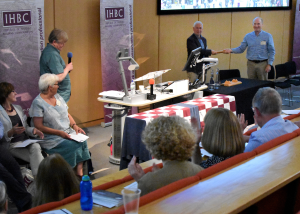 The IHBC’s Council – its Board – has agreed to hold the Institute’s 2020 AGM on 3 December as an online, ‘virtual’ event, with voting planned on the new Corporate Plan (‘CP25’) and on modernising governance though the proposed new ‘Articles’, all with more details to come, including arrangements for the postponed Council+ programme.

On the IHBC’s new governance and draft ‘Articles’, the IHBC writes:

The early development of the IHBC’s current proposal to adopt new Articles at the 2020 AGM on 3 December… culminated in the IHBC’s 2019 AGM adoption of the ‘Proposal for future governance of the Institute’. The recommendation to members of the new Articles here marks the next step in the modernisation of the IHBC as a specialist and professional body and charity for the 21st century.

Since the adoption of the 2019 ‘Proposal for future governance…’, the IHBC has been working hard with our legal advisers, Knights, and national charity regulators in England and Wales and in Scotland to agree a text that represents the ambitions agreed then. We opened the consultation on the draft new Articles in January 2020. Although in-person discussions had to stop in the Spring due to the pandemic, the consultation has remained open, operating alongside the discussions with legal advisers and charity regulators.

Over the summer the IHBC received ‘in principle’ approval from the regulators on a text only slightly modified from the consultation draft, with the adjustments noted below.

Regarding the Articles proposed for adoption at the 2020 AGM, Members should note that:

If you have specific queries on the Articles please email governance@ihbc.org.uk or the relevant officer.

Adjustments to the consultation draft Articles made during the membership and regulatory scrutiny are:

See the Articles as proposed to the AGM HERE

See the NewsBlog launch of the consultation on the Articles HERE

See the NewsBlog update on the IHBC’s 2019 AGM

See the ‘Proposal for future governance of the Institute’ adopted at the 2019 AGM, which forms the basis for the Articles being proposed for adoption at the 2020 AGM.