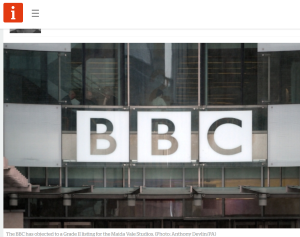 The BBC has objected to the listing of the historic Maida Vale Studios.

…concerned about the financial impact this could have on the Corporation…

The BBC is appealing the grade II listed status of its Maida Vale studios because it wants to sell off the building for redevelopment as apartments, it has emerged.

The iconic studios have played a key part in some historic music performances since they were acquired by the BBC in the 1930s….

… the Department for Digital, Culture, Media and Sport (DCMS) subsequently awarded the building grade II listed status in May this year.

Now, according to The Times, minutes from a BBC board meeting reveal it is so concerned about the financial impact this could have on the Corporation it has lodged an objection to the DCMS decision, making a “strong appeal” to have parts of the listing amended.

Historic England are reported to have advised the government on the listing, highlighting its Edwardian frontage and unique place in musical history.

But the BBC are said to have originally objected claiming the building had asbestos and was unfit for the 21st century.

The BBC told i it would not be commenting as this was an ongoing process.

Built in 1909, the Maida Vale Studios has been home to the BBC Symphony Orchestra since 1934.

The complex of seven sound studios has hosted the John Peel Sessions and The Evening Session, as well as some of the recordings for The Beatles Live at the BBC collection released in 1994.