IHBC’s  features ‘Heritage from the doorstep’: Petition to save former Weymouth community pub from demolition 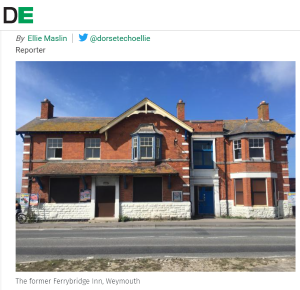 The Dorset Echo has featured a campaign to prevent an historic former Weymouth community pub, the ‘Ferrybridge Inn’, being demolished and turned into flats.

The 120-year-old Ferrybridge Inn, on Portland Road, Wyke Regis, is due to be knocked down and turned into a complex of 29 flats and a new pub or restaurant after planning permission was granted in 2018. Originally built in the 1890s its initial role was to collect tolls from people crossing to Portland, later becoming a pub. But despite its rich history the building is not listed and can be knocked down. Doubt had been cast over whether the development will still go ahead as planning permission – given to a London firm, Boyer, acting on behalf of Dorset landowner Ilchester Estates – was due to expire earlier this month. However, it has emerged that a change in the law could give developers extra time.

Meanwhile, in a last ditch attempt to save the iconic building, residents have started a petition calling for Dorset Council to intervene and force the new owners to keep it as a community asset. Dave Taylor, who started the petition ‘Act Now – Save the Ferrybridge Inn’ on change.org, said: ‘The Inn is the only remaining connection to the original ferry and bridge… ’

Nearby resident Ann Douglas said: ‘It’s just an eyesore – I just hope they don’t now put in a planning application for something that’s even more intrusive…’