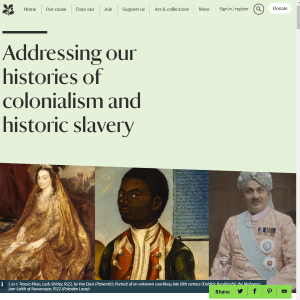 The National Trust has acknowledged that some of its collections can ‘cause offence and distress’, as it publishes an interim review into links between its properties and the slave trade.

The charity released its first research into those links yesterday, after starting the review last September. It pledged to “accelerate” the process in response to the Black Lives Matter movement over the summer.

The National Trust is now inviting feedback on the review from the public, and says it is convening an independent panel to advise the charity on the next steps to take.

A third of properties have colonial links

In a statement on its website, the charity said: “Some objects in National Trust collections depict Black people in ways that stereotype them or that objectify Black bodies. Some cause offence and distress.” The statement also recognises that the charity’s collections “include objects made or owned by enslaved people”.

In the review, the Trust identifies 29 properties which are now in its care and which once had links to slave-owners, and says that a third of its properties have links to “colonial histories”.

‘We won’t always get it right’

The statement also said that the National Trust will continue to “research and develop our understanding of the rich and complex relationships between our places and objects and world culture and history”.

The charity said that it hoped the review would “open up debates that further our collective understanding, and make our places and collections relevant and responsive to increasingly diverse audiences.

“We will test and evaluate our approaches. We accept that much of this is new for us and we won’t always get it right, but we will learn from our mistakes.”

Better understanding of the past

Also writing on the website, John Orna-Ornstein, director of culture and engagement at the National Trust, said: “The report we’ve published this month is not intended to make judgments about the past. We’re presenting information based on research, allowing people to explore and draw conclusions for themselves.

“No one alive today can ever be held responsible for the wrongs of the period when slavery took place, but we can seek to understand this better.”

The introduction to the review says that the charity will try to “do justice” to the complex histories of its collections.

It says: “Those histories are deeply interwoven into the material fabric of the British Isles. A significant number of the collections, houses, gardens and parklands in our care were created or remodelled as expressions of the taste and wealth, as well as power and privilege, that derived from colonial connections and in some cases from the trade in enslaved people.

“We believe that only by honestly and openly acknowledging and sharing those stories can we do justice to the true complexity of past, present and future, and the sometimes-uncomfortable role that Britain, and Britons, have played in global history since the sixteenth century or even earlier.”