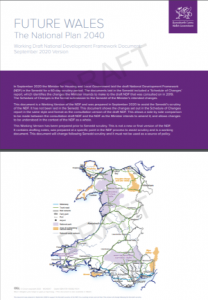 The Welsh Assembly Senedd is to consider, for a 60-day period, the National Development Framework (NDF), setting the direction for development in Wales to 2040.

….a major policy document that will ….inform Welsh Government decision-making

The Climate Change, Environment and Rural Affairs Committee (the Committee) will be undertaking work on the latest iteration of the Welsh Government’s draft National Development Framework (NDF).

The NDF is a spatial planning document which is required under the Planning (Wales) Act 2015 (the Planning Act).

The Planning Act requires the Welsh Ministers to develop a NDF. The NDF will set out a 20 year land use framework and be reviewed at least every five years. It is a major policy document that will set national spatial policy, direct Strategic Development Plans and Local Development Plans, and inform Welsh Government decision-making on major planning applications.

In August 2019, the Welsh Government published its draft National Development Framework[Opens in a new browser window] for consultation.

Following the consultation, and in line with the requirements in the Planning Act, the draft NDF must be laid before the Senedd for consideration for a 60 day period (‘the Senedd consideration period’) before it is finalised.

A copy of the draft NDF which incorporates the proposed changes can be found on the Welsh Government’s website[Opens in a new browser window].

The Committee will consider the proposed changes to the draft NDF and report to the Senedd before the end of the 60 day period.

The Planning Act sets out the following provisions that relate to the NDF: