National Trust to make more than 1,000 redundancies after consultation 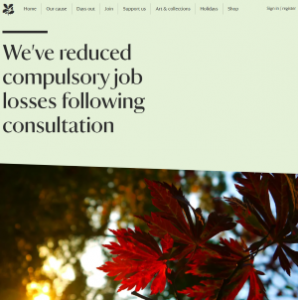 After considering more than 14,500 pieces of feedback from staff and volunteers during the 45-day consultation, the National Trust (NT) is making 514 compulsory redundancies as a result of the impact of the coronavirus crisis and has accepted 782 voluntary redundancies, to help save about £100m to support conservation work each year.

Following the biggest redundancy consultation in the National Trust’s 125-year history, we can today confirm that we’ve been able to almost halve the number of proposed compulsory job losses at the charity.

After considering more than 14,500 pieces of feedback from staff and volunteers during the 45-day consultation, we’re making 514 compulsory redundancies as a result of the impact of the coronavirus crisis. We’ve also accepted 782 voluntary redundancies. These will help us to save about £100m to support our conservation work each year.

In July, we announced that job losses and budget cuts were inevitable after almost every aspect of the charity’s income was hit by the coronavirus crisis. We proposed making almost 1,200 compulsory redundancies, saving £60m of our annual staff budget. But following a wide-ranging consultation with affected staff, the number of compulsory job losses has reduced by half.

A number of roles will now be retained

Following the consultation, a number of changes have been made to the original proposals, including retaining roles focused on helping children learn, keeping curation specialists across England, Wales and Northern Ireland, increasing buildings maintenance roles, and introducing new specialist roles for land use, soils and carbon reduction. There have also been changes in other areas covering marketing, retail, holidays, IT, legal and the let estate.

Director General Hilary McGrady paid tribute to staff, volunteers and members who have shared their views on the proposals, and vowed the Trust would ‘grow back stronger in the long-run’ with its plans putting it on course for a secure financial future.

She said: ‘It’s with deep sadness that we have to make redundancies. I certainly don’t want to stop any of the extraordinary work done by the people of the National Trust.

‘But our consultation has done as intended. It provided proposals to reach our savings target, and sparked such thorough feedback and collective intelligence, that we’ve been able to adapt our plans while still making the savings we needed. It’s been a difficult process with some very hard choices.

‘I want to thank everyone who has been involved – especially those whose jobs have been affected and the members and volunteers who care so passionately about the Trust. They’ve really tested the ideas put forward, and helped shape our proposals so that we are in the best possible position to recover well.’