IHBC features ‘Heritage from the doorstep’: Old articles and a labour of love restoration – Lutyens and Jekyll via The Farnham Herald 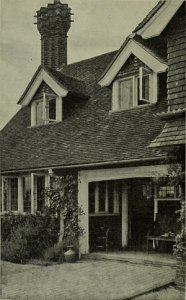 The Farnham Herald has reported on a series of articles on the history of Crooksbury House on the slopes of Crooksbury Hill above Tilford – described as the ‘first country house commission by Edwin Lutyens with a surrounding garden by Gertrude Jekyll – which has helped inspire restoration works.

image: for illustration purposes only – Lutyens houses and gardens

To restore the many Lutyens and Jekyll features – tiled garden walls, tile hung walls… trying to locate any plans…

Many years ago this column carried a series of articles on the history of Crooksbury House on the slopes of Crooksbury Hill above Tilford. This was the first country house commission carried out by Edwin Lutyens with a surrounding garden designed by Gertrude Jekyll. As such it is well known and featured more than once in Country Life magazine which assisted when we were preparing the Peeps features.

However, over the years and a succession of owners, it has become too large to be a single family home and has now been split into a number of individual properties….

….Charlotte Lockhart and Andrew Barnes who have recently purchased one of these, Fig Tree Court, and are determined to restore it to something like it would have originally looked.

….this really is a labour of love, and one that won’t be achieved too quickly, particularly with the gardens.

Being built on a sandy hilltop, there is no easily accessible natural water supply and this dry summer has been particularly hard (when built Crooksbury had its own fire brigade because of the surrounding heath and pine woodland).

To restore the many Lutyens and Jekyll features – tiled garden walls, tile hung walls, brick paving, curved brick arches over wooden garden gates all with unique wrought iron door furniture and Lutyens bookcases in the drawing room – Charlotte is still trying to locate any plans or drawings relating to the house.

However, it’s not just the architectural features that interest her. Charlotte would dearly like to find out more about the social history too – former owners and visitors, the staff who worked there and all the little details of how such a property operated since it was first built for W A Chapman in 1890 (most of Fig Tree Court was added a little later, in 1898–99).

If you have any information about the house and its occupants, photographs or plans, or even just memories of visiting the house, please share them….