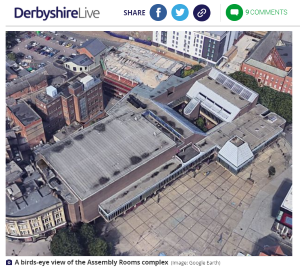 A planning application has been submitted by Derby City Council to knock down the 43-year old Assembly Rooms – which has played host to the likes of Elton John, Iron Maiden, Take That, etc – as The Derby Telegraph has reported.

plug was pulled…work would cost in the region of £33.5 million…

A planning application has been submitted by Derby City Council to knock down the Assembly Rooms and adjacent car park.

The 43-year-old building, which has played host to the likes of Elton John, Iron Maiden, Take That, snooker stars and pantomime favourites, has stood unused in Derby’s Market place since March 2014 following a fire in the adjacent car park.

Various plans were put forward in the interim to demolish and build a new venue in its place and more recently the current council administration had decided to refurbish it at a cost of £23 million.

But the plug was pulled on that plan earlier this year when it was realised that the work would cost in the region of £33.5 million and would also require the roof planks made of reinforced autoclaved aerated concrete (RAAC) to be completely replaced because of the danger of them failing.

Last month, the council announced it was planning to build an alternative performance venue, holding 3,500 and costing £43 million, in the Becketwell area of the city, having already spent more than £200,000 in preparation for refurbishing the Market Place building.

At the same time, councillors said they were planning to demolish the Assembly Rooms within 18 months and use the space created as a leisure area and car park until a permanent plan for the site was drawn up.

The planning application gives more details of how and why the council has decided not to press ahead with refurbishment and also its justification for demolition.

It lists safety reasons because of the RAAC roof planks as a major factor, together with the maintenance burden of ensuring the building remains secure and safe, which currently costs £70,000 a year.

The council also justifies the demolition by saying that it will give the Market Place and Cathedral Quarter area a greater chance of regeneration and future development.

A heritage report says that demolishing the Brutalist architectural-style building “amounts to harm” because it is a significant building in its own right.

But the report concludes that the building does not “contribute to the conservation area in which it stands”.

Brutalism is a style that emerged in the 1950s and grew out of the early-20th century modernist movement. Brutalist buildings are characterised by their massive, monolithic and blocky appearance with a rigid geometric style and large-scale use of poured concrete.

The architectural features of the building’s exterior have been praised previously by the Royal Institute of British architects (RIBA).

Seven trees of “moderate” to “very low quality” within the area between the Assembly Rooms buildings and one in the Market place will be felled as part of the proposal if it is given the go-ahead. Although more trees are scheduled to be planted in the future to replace them.

The planning application should be decided in the next two months but there is no timescale available currently for the demolition.

Noisy work would not take place on Sundays and bank holidays and it might become necessary to impose some limited road closures in Full Street at various times.

Notices have been posted in the vicinity of the building and anyone wishing to comment on the planning application has around three weeks to do so.