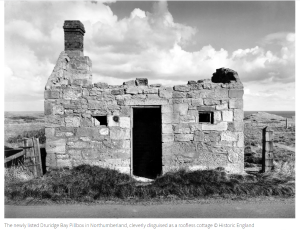 An air raid shelter at a Surrey primary school, covered in murals depicting scenes from Treasure Island, Robin Hood, and Gulliver’s Travels; a pillbox cleverly disguised as a roofless cottage in Northumberland to protect the area from German invasion; a rare Chain Home radar defence tower in Essex; and a war memorial to commemorate civilians in Dorset who lost their lives have been granted protection to mark the 80th anniversary of the Battle of Britain, on 15 September 2020.

These four new listings by the Department for Digital, Culture, Media and Sport (DCMS) on the advice of Historic England are highlighted alongside three other sites which have been either upgraded or re-listed to mark Battle of Britain Day (15 September 2020). In their variety, they show how the Battle has left its mark across England.

Although the Battle of Britain took place between July and October 1940, the date of 15 September is widely seen as when Britain’s RAF Fighter Command gained a decisive victory over the German Luftwaffe.

Two sites have been newly upgraded from Grade II to Grade II*, including another Chain Home Transmitter Tower– at RAF Stenigot in Lincolnshire. Standing at 110m, the same height as St Paul’s Cathedral in London, the tower and the newly listed example in Great Baddow, Essex, are rare surviving physical components of the world’s first radar air defence network and among very few from the network to remain standing today. Built in the late 1930s, it is a reminder of the widespread anxiety during this period about the impact of aerial assaults on the UK.

Also newly upgraded to Grade II* is an important memorial in Ruislip, West London to the Polish Air Force who made a major contribution to the Allied war effort during the Second World War and particularly during the Battle of Britain.

The final highlighted site is the Spitfire Club at RAF Tangmere in West Sussex- the headquarters for Number 11 Group of Fighter Command which played a pivotal role defending London and the South East in the Battle of Britain. The site has been relisted, now also with information about its connection to the Battle of Britain added to its list description on the National Heritage List for England.

“The Battle of Britain affected every corner of our nation and it is right that, as we mark its 80th anniversary, we protect the sites, memorials and buildings paying tribute to those who fought and those who lost their lives.

“I am pleased that by protecting these sites we can continue to tell the story of the Second World War and keep alive the stories of this greatest generation who fought for our freedom.”