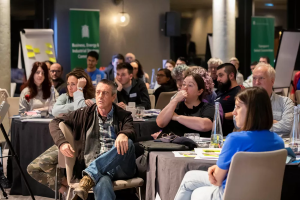 The first UK-wide citizens’ assembly on climate change, which was commissioned by six House of Commons Select Committees, has published its final report on how the UK can reach its legally binding target of net zero emissions by 2050.

…rise to the challenge of achieving the net zero target…

Six Select Committees of the House of Commons commissioned the citizens’ assembly to understand public preferences on how the UK should tackle climate change because of the impact these decisions will have on people’s lives. Today Climate Assembly UK hands its work back to the committees with their final report, The Path to Net Zero, issuing strong calls to Parliament and the Government to rise to the challenge of achieving the net zero target in a clear, accountable way.

Climate Assembly UK’s report, The Path to Net Zero, shows how a representative sample of the population believe the UK should meet its net zero emissions commitment with detailed recommendations across ten areas including: how we travel; what we eat and how we use the land; what we buy; heat and energy use in the home; how we generate our electricity; and greenhouse gas removals.

Welcoming the publication of the report, Chair of the Business, Energy and Industrial Strategy Select Committee, Darren Jones MP, said:

“This is an extremely important contribution to the debate on how the UK reaches our net zero target and I hope it gives impetus to policy makers to take bold action to reduce our emissions. The range of voices within these pages reflect our population. The fact that assembly members have been able to arrive at clear recommendations whilst respecting each others’ values and experiences sets an example for us all. Participants speak of their learning, how they clarified their views and their respect for each other’s perspectives, even when they didn’t agree. Their voices are front and centre, just as they should be.

“It is vital that Parliament and Government examine and use the recommendations which the Assembly sets out today. Assembly members agree that the task of reaching net zero is a responsibility shared by all generations and we thank them for doing just that, giving up their time to listen, understand, debate and propose solutions which are underpinned by a desire to be fair to everyone in our society, and to retain freedom and choice for individuals and local areas wherever possible.”

In response to calls for strong government leadership and cross-party cooperation, the Chairs of the six commissioning Select Committees have written a letter to the Prime Minister, urging him to ensure that the Government acts on the recommendations of Climate Assembly UK by “showing leadership at the very highest level of government” ahead of the UK hosting COP26 in November 2021. They have also written to the leaders of the other parties represented at Westminster, highlighting the role opposition party leaders have to play in delivering cross-party consensus on reaching net zero.

The work of Climate Assembly UK is designed to strengthen and support the UK’s parliamentary democracy by ensuring politicians and policy makers have the best possible evidence available to them about public preferences on reaching the net zero target. Parliament will use the report to support its work on scrutinising the Government’s climate change policy and progress on the target.