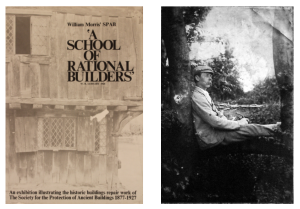 The SPAB look back on the work of Scottish architect William Weir (1865-1950), one of our most respected caseworkers, and was part of a group of dedicated experts active in the first 50 years of the SPAB.

…ancient architecture was an essence & reality, not a ‘style’ which might be resumed in another kind of society

…Webb wrote: ‘Truly it looks more ‘ancient’ than before you laid hands on it…

In 1982 the SPAB held an exhibition called ‘A School of Rational Builders’ at the Drawings Collection of the British Architectural Library on Portman Square, London W2.

The title of the exhibition is a quote by William Lethaby (1857-1931) describing the SPAB in one of his writings about Ernest Gimson (1864-1919), whose history and work featured in the exhibition. He wrote:

‘Here [at the SPAB] Gimson’s love for old buildings deepened into a passionate reverence, and from this very regard he early came to see that ancient architecture was an essence & reality, not a ‘style’ which might be resumed in another kind of society at will by a different kind of people. It is a curious fact that this Society, engaged in an intense study of antiquity, became a school of rational builders and modern building.’

The exhibition comprised of a selection of material from the Society’s archive from the 50-year period 1877-1927 and highlighted the wealth of documents, photographs and drawings in the Society’s collection which explored the history of the SPAB and its founding principles, but also into the work of less famous associates of the Society whose achievements in the area of the preservation of historic buildings were extensive and critical. The history and casework of figures including William Weir, who surveyed extensively for the SPAB; George Jack, who was Weir’s site architect and was responsible for the damage report on Rievaulx Abbey in 1908; and Alfred Powell, a craftsman and architect who compiled a series of pamphlets along with A.R. Powys on English cottage and farm buildings for the Society.

One of the buildings which William Weir worked on and which was featured in the exhibition is the Church of St Margaret Marlos, Eglwys Cummin in South Glamorgan. The site is thought to be ancient, founded by Saint Cynin in the fifth century, though the present building is medieval.  This church had been visited by Philip Webb (co-founder of the SPAB) on the request if Mr Trehernem the agent for the property and a member of the Society. Weir was the architect chosen to supervise the repairs needed. On receiving Weir’s photographs of the repaired church in November 1901, Webb wrote: ‘Truly it looks more ‘ancient’ than before you laid hands on it … the continuous solid looking stone ridge is more than worth the money it cost. The pointing too – now, looks really workmanlike.’

The life and work of William Weir will be celebrated during this year’s Explore Your Archive festival in November with a talk by Michael Drury, senior partner at St. Ann’s Gate Architects and author of ‘Wandering Architects’. There will also be an online exhibition of Weir’s notebooks and reports on the buildings that he visited on behalf of the Society and the repair works that were carried out to accompany the talk.