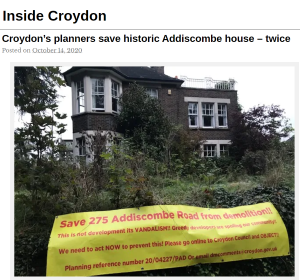 Addiscombe residents are preparing themselves for a renewed battle to save an historic, landmark house in their neighbourhood after the council’s planning department ‘first refused planning permission to the building’s owners to convert the house into flats, and today refused permission for it to be demolished’, reports InsideCroydon.

Locals who have researched the history of the area believe that it was one of two similar houses (the other was demolished 40 years ago) and that 275 glories in the name of “Ecclefechan”, the name of a village in the south of Scotland, the birthplace of historian Thomas Carlyle.

In the 1840s, Carlyle had been a frequent visitor to the nearby Ashburton House (also now long gone) when it was the home of Lady Ashburton; not far from 275 Addiscombe Road is Carlyle Road, named after the man of letters.

Harriet, Lady Ashburton, was a wealthy socialite, the daughter of the Earl of Sandwich and the wife of an MP, and she was often in correspondence with Carlyle, in her letters describing Addiscombe Farm as “a 10-minute walk from Croydon Station”, encouraging him to visit. Lady Ashburton also entertained William Thackeray and John Stuart Mill.

There had been no such grand parties at Ecclefechan in recent times, however, as it had been left vacant for many months, and was sold in July 2019 for £1.2million to a firm of property developers.

The new owner is a company called Marlpark 275 CRO Ltd…

ASPRA, the Addiscombe and Shirley Park Residents’ Association, described the proposals as “greedy vandalism on a grand scale”. They believe that the building adds to the character and interest of the area.

….the council planning department wrote to agents representing the owners to advise that their latest application to convert the building had been refused permission because they “would have harmed the character and appearance of the host dwelling, the wider area and the non-designated heritage asset”.

The developers’ response was to file an immediate second application, this time to demolish the building altogether.

“I can only imagine this is pure spite from the developer, who has found locals objecting to his previous planning applications, which were turned down by the council, so he has just decided to knock it down,” one concerned resident told Inside Croydon.

“ASPRA feared the worst, not least because they received advice from a council planning official that “demolition of existing buildings is largely permitted development under government regulations (meaning it already has planning permission in effect) unless the building is listed, or is in a conservation area, or is a pub that is listed as an Asset of Community Value.”….

The planners were also unhappy with the scheme’s approach to the trees on the site….

“That’s the best news I’ve had for a very long time,” said one of the campaigners.

The residents realise that the developers could re-submit an application or appeal either or both of the council’s decisions to the planning inspectorate.

“We’ll keep working on this. We will have to see what case we can make to have the building listed,” they said.